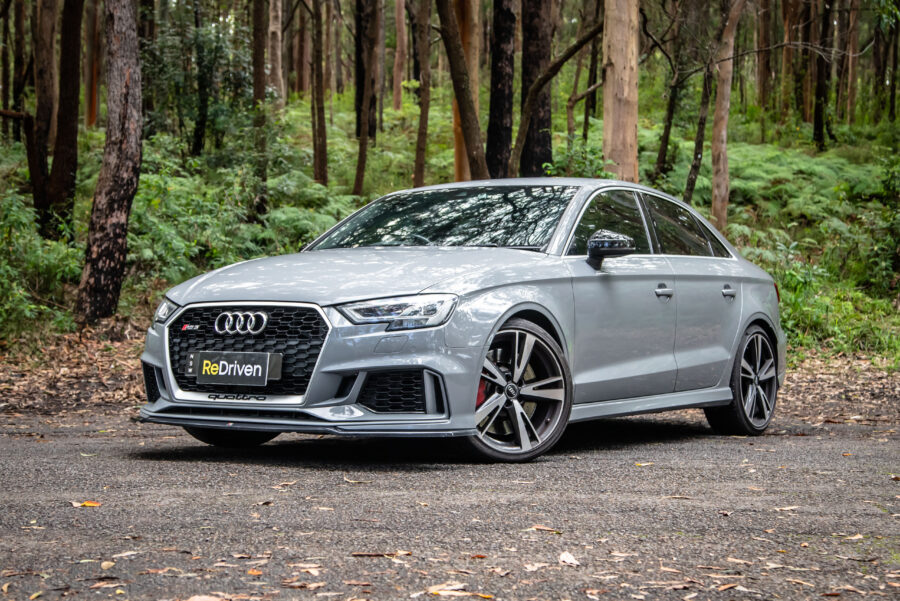 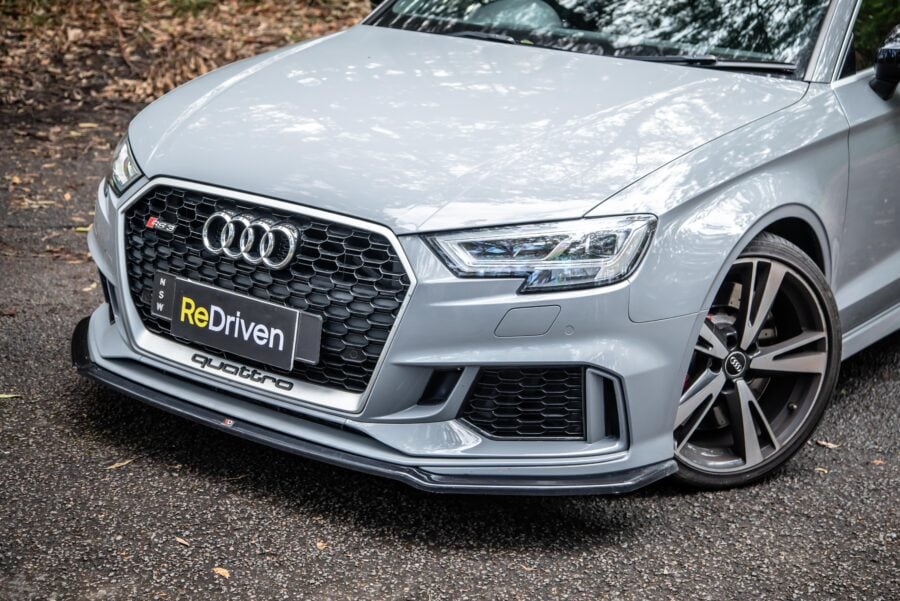 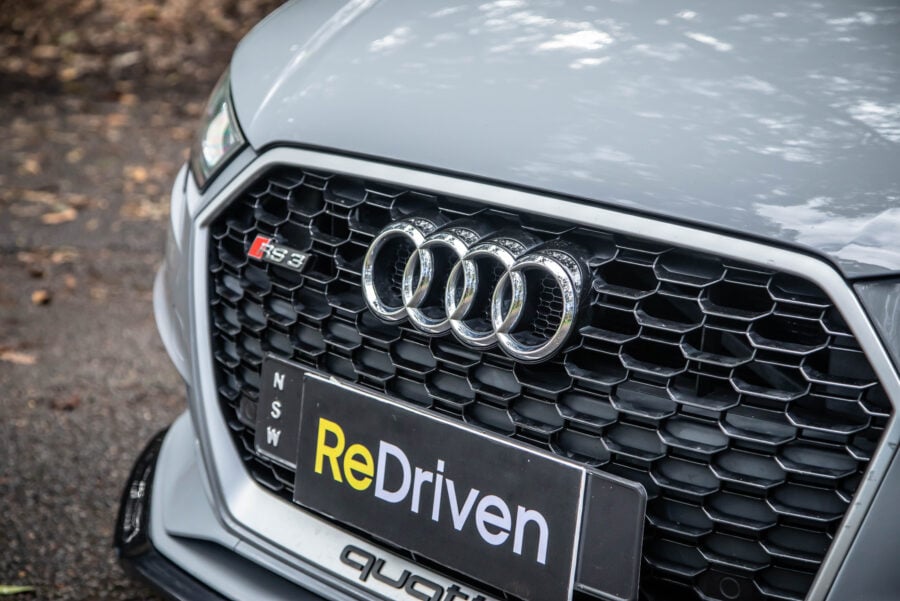 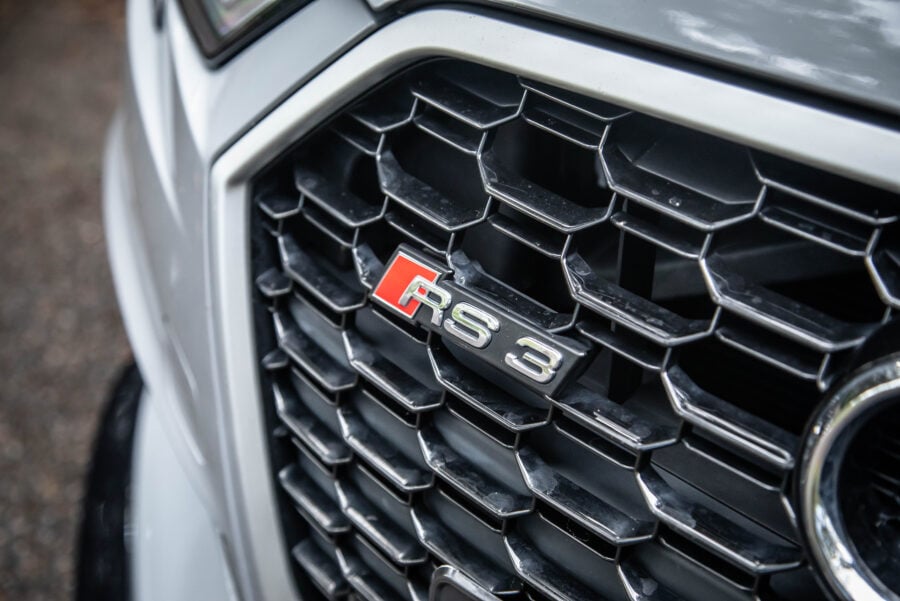 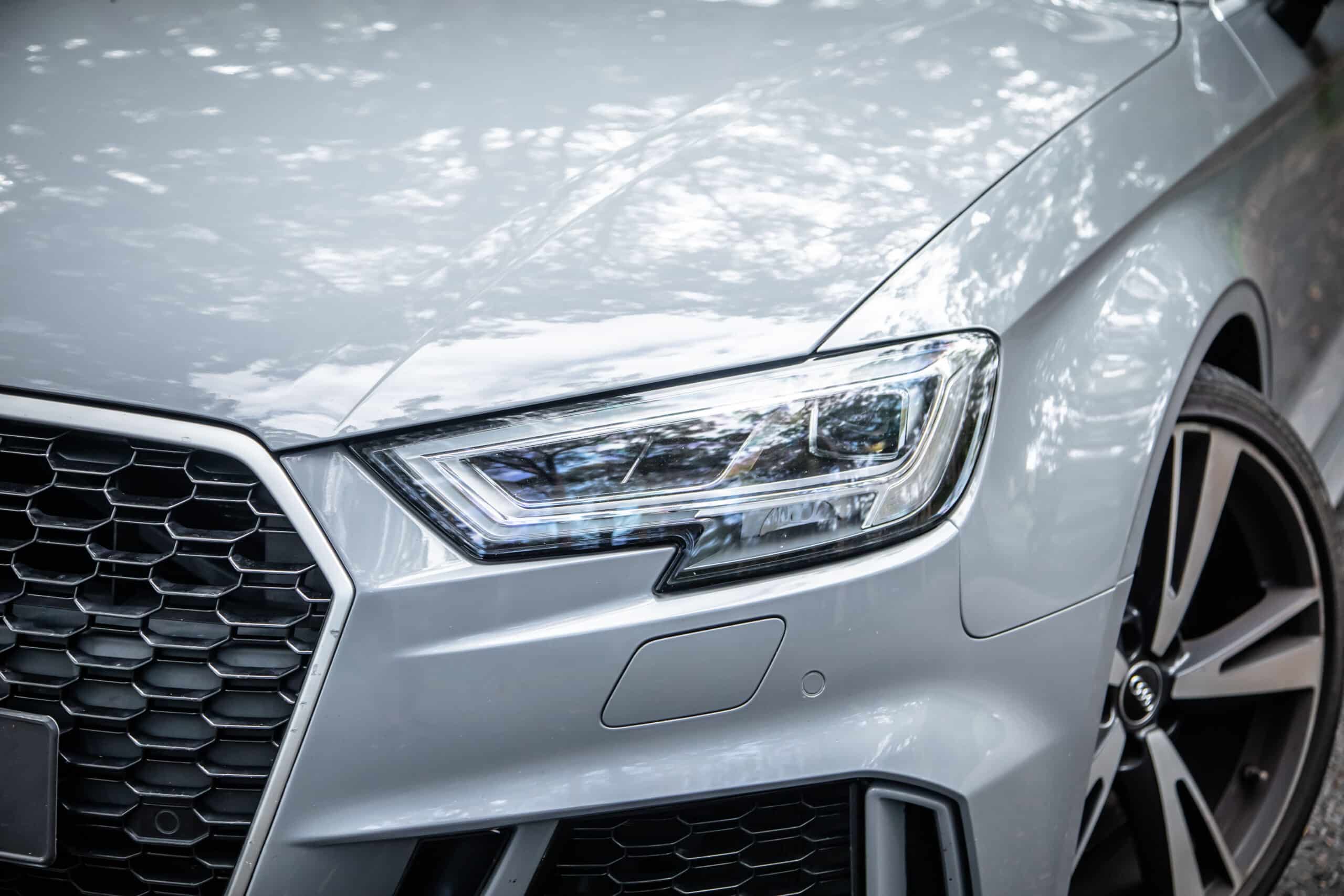 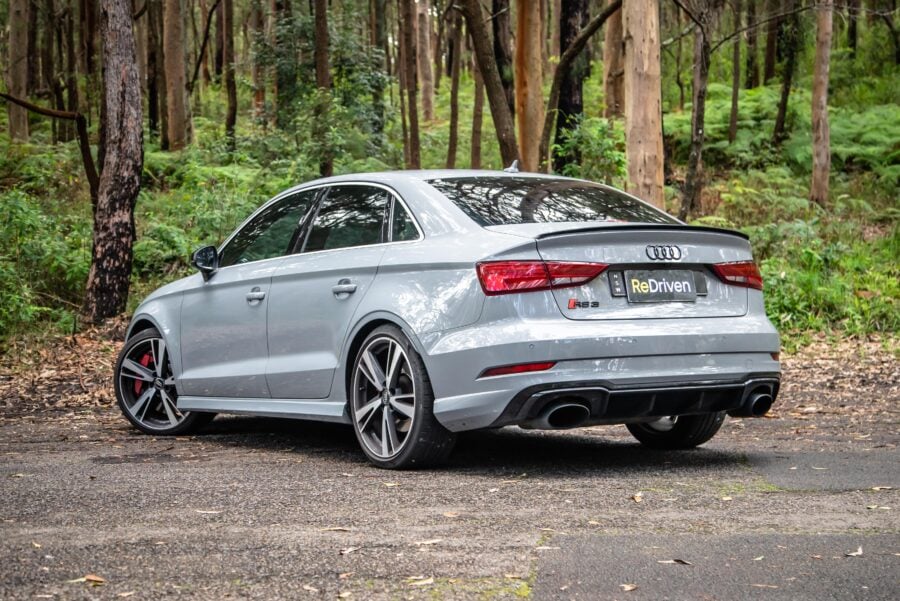 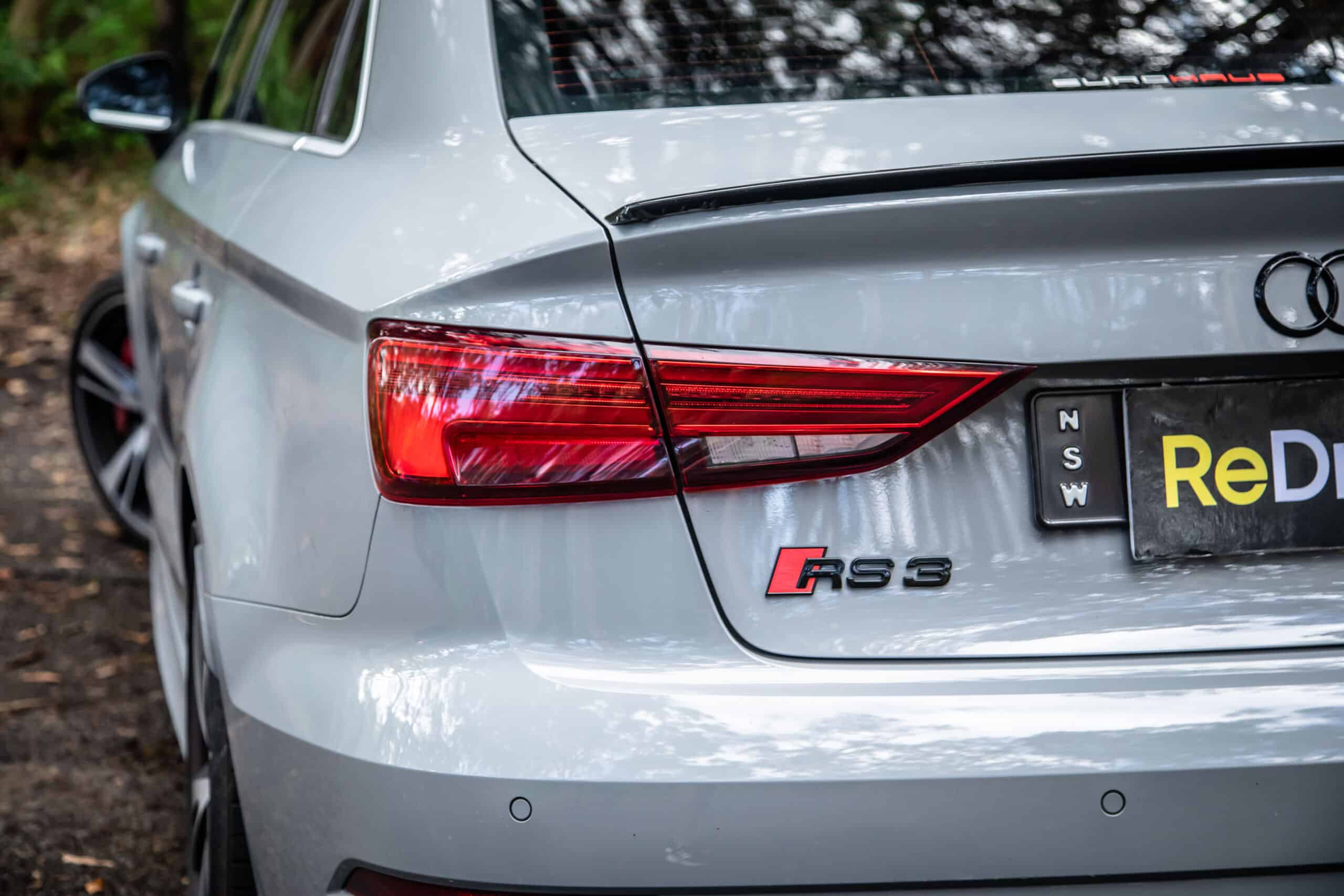 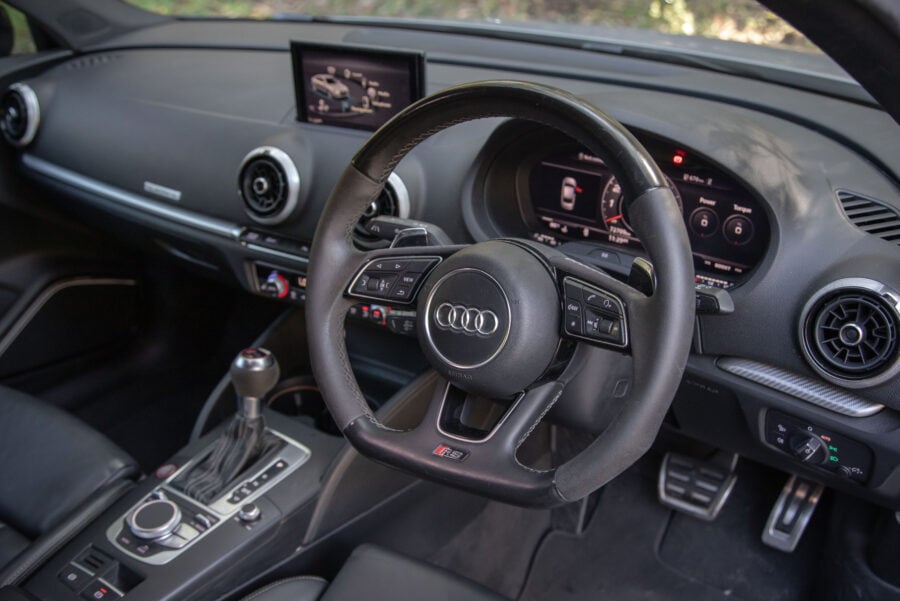 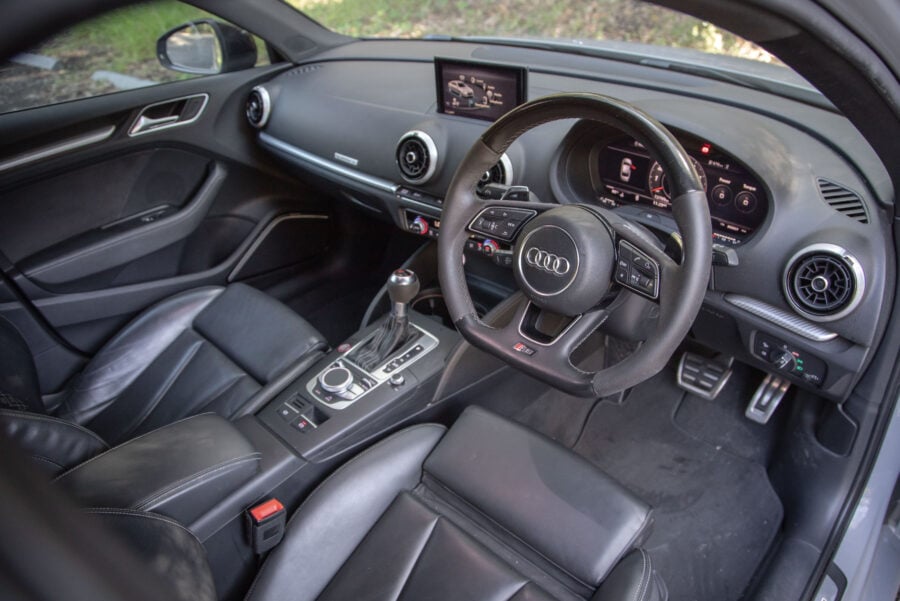 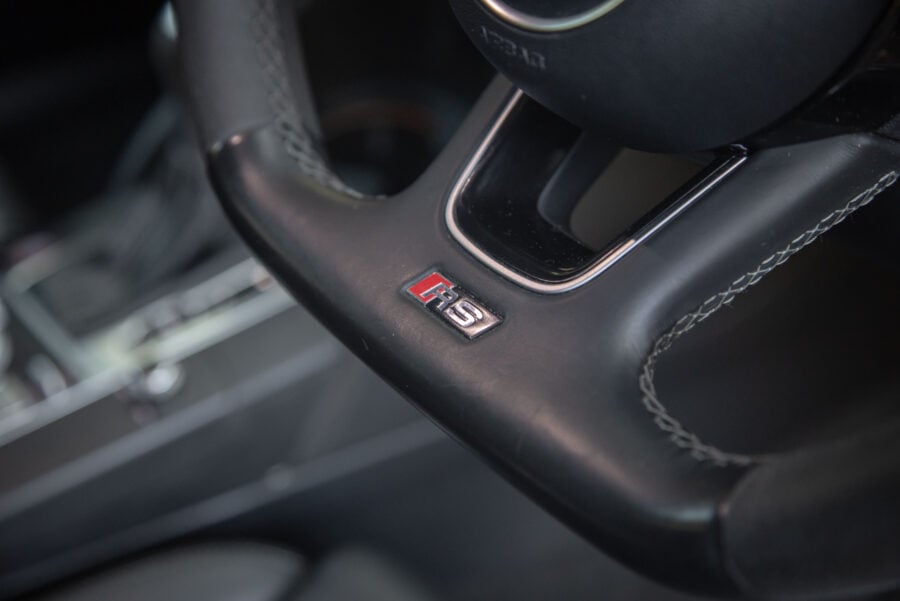 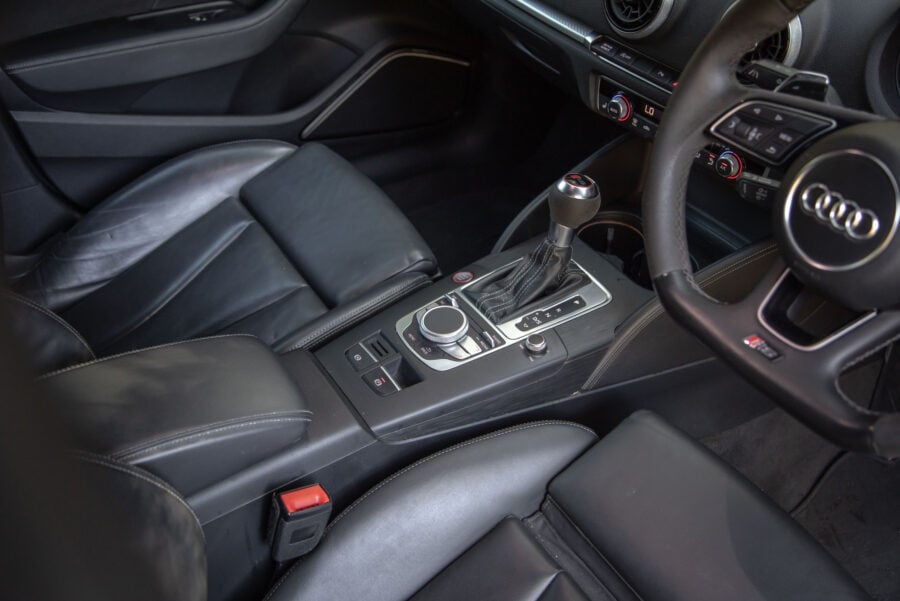 Audi’s hottest-ever hatchback, the RS3, made all the right noises, literally and figuratively, when it first lobbed in locally. The nameplate had lived shortly in other markets in gen-two (8P) guise but couldn’t hurdle the necessary ADRs. So Australia’s love affair really began with the arrival of its second iteration, based off the gen-three A3 (8V), in 2015.

With its hi-po turbocharged 2.5 five-cylinder, all-paw traction and 4.3-second 0-100km/h claim, it was instantly coined a giant-killer. For sheer performance, it was level above the likes of Volkswagen Golf R, among Audi’s quickest ever production cars and reset hot hatch benchmarks, albeit in direct competition with the just-launched and equally swift arch nemesis, the Mercedes-AMG A45. Independent media testing clocked it closer to four-seconds flat…

Equally special was the price. The basic RS3, with passive suspension, nudged $80k. Start adding the fun stuff like ceramic brakes ($9k), fixed bucket seats ($4500), driver assistance updates ($2k) and the like and your RS3 could hit six figures. On that, the key Performance Pack ($6500) brought adjustable suspension, styling tweaks and carbon bits, a top speed lift (from 250km/h to 280km/h) and the bizarre spec twist of wider front tyres (255mm) than the rears (235mm).

That’s because while the RS3 is utter dynamite in a straight line, its formula made for a bit of understeerer on a racetrack where, presumably, you’d best tap its ultimate potential. Not to say it’s not a cracking back-road carver because the on-road pace the smallest RS model in the fleet could muster is quite breathtaking. It’s just not, famously, as playful a chassis as some other less- potent hot hatches.

By the time the sedan version arrived in 2016 (for an MY17 facelift) outputs had risen to 294kW and 480Nm bringing a sharper 4.1sec 0-100km/h claim. A plusher fit-out, including Nappa leather trim and added bells and whistles, saw pricing creep to $85k for the four-door versions, around four-grand up on the hatches, which could be personalized with one of four different Performance packs ($6k).

In 2018, the RS3 was removed from sale for 18 months due to issues with WTLP certification, returning in 2020 in re-face-lifted form and new (necessary) petrol particulate filter mods, if without noticeable performance degradation. High-spec Carbon Edition versions wanted for a few grand more than the regular hatch ($83,800) and sedan ($86,500). Adaptive suspension and Apple CarPlay/Android Auto smartphone mirroring was now standard.

For MY22, the RS3 was again revised in a guise sailing north of $90k, now powered by a 2.5L tune boasting 500Nm and offering claimed 3.8sec performance for a breed that just seems to get more potent and quicker with age.

Released in October 2015 into the Australian market, the Audi RS3 was available with a 2.5 litre turbocharged 5-cylinder engine mated to a 7-speed dual clutch automatic transmission.

The RS3 was only available in a 5-door hatchback, and featured a variety of luxury and premium features found on similar Audi luxury and sports models. As like most Audis, the RS3 came with a plethora of different option packs including the RS performance package, RS design package, Assistance package (which adds Audi pre-sense, adaptive cruise control, high-beam assist) and different styling packages.

The RS3 went on hiatus between mid-2018 and early-2020 due to emissions regulations. When the RS3 returned to Australia, additional features as part of its’ June 2020 update included: metallic paint, Audi magnetic ride, Qi wireless phone charging and a 14-speaker Bang & Olufsen sound system.

With the return of the RS3 in mid-2020, the RS3 was made available in a Carbon Edition model – available both in the hatchback and sedan guise.

Basically, it’s a small high performance European car that, if not maintained to near obsessive levels or if it has been treated with minimal mechanical sympathy, may potentially cost a fortune to repair in the future.

In terms of driving, yes it’s bloody fast and it gets up to to immense speeds so easily but honestly, do you really genuinely need a car this fast, isn’t that just asking for trouble?

But, that does bring us to…how good these are, and why you should buy one.

As I said at the start of this video the RS3 might just be the perfect car, its incredible combination of skills, how well it executes everything it attempts while proving to so far be reliable and hold its value when used is astounding.

So which is it, should you buy one? It’s a yes but, only if A: you can easily afford the upkeep and maintenance and have some cash stowed away incase something goes bang

And B: if you’ve found a superb example that the seller can categorically prove has been cared for and maintained thoroughly.

It is so close to perfect but remember, the price of perfection is bloody high