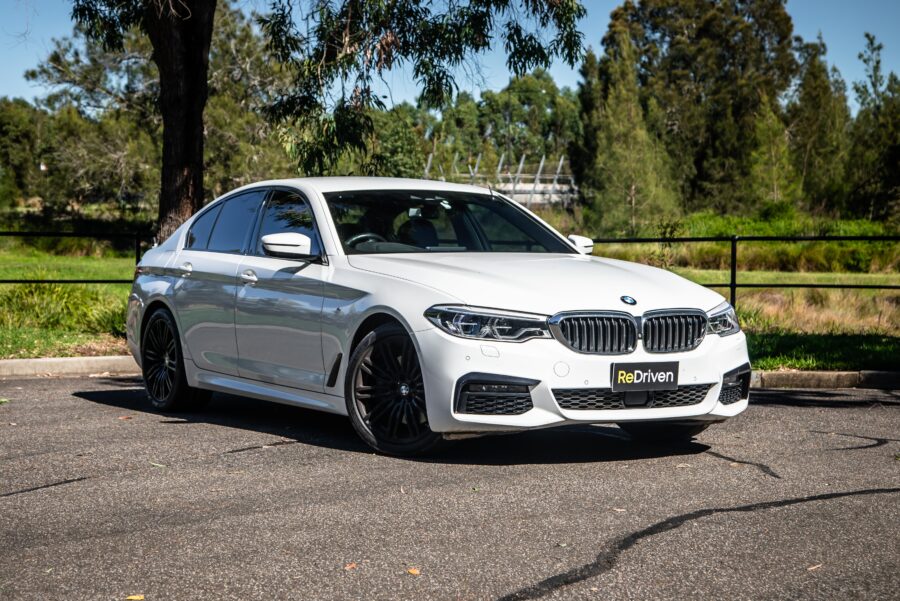 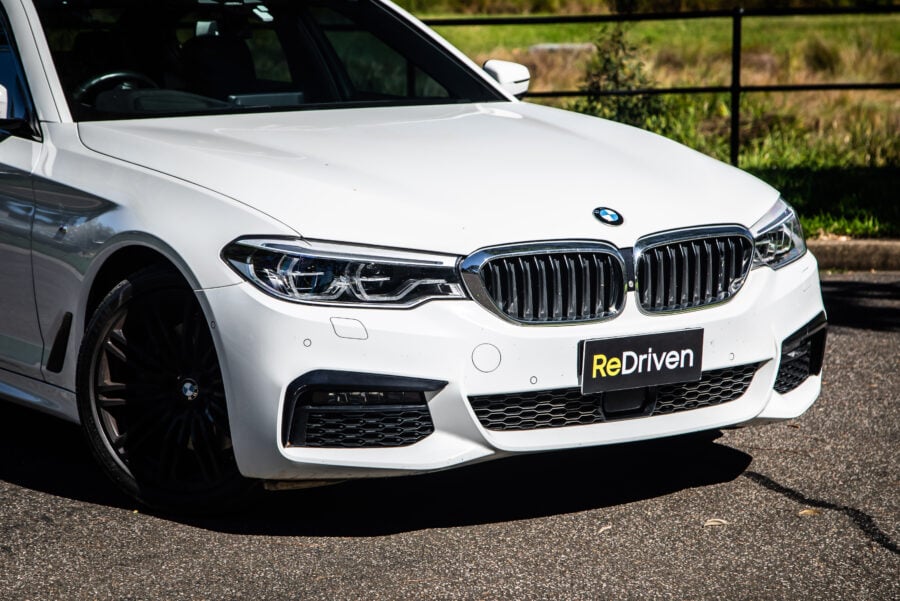 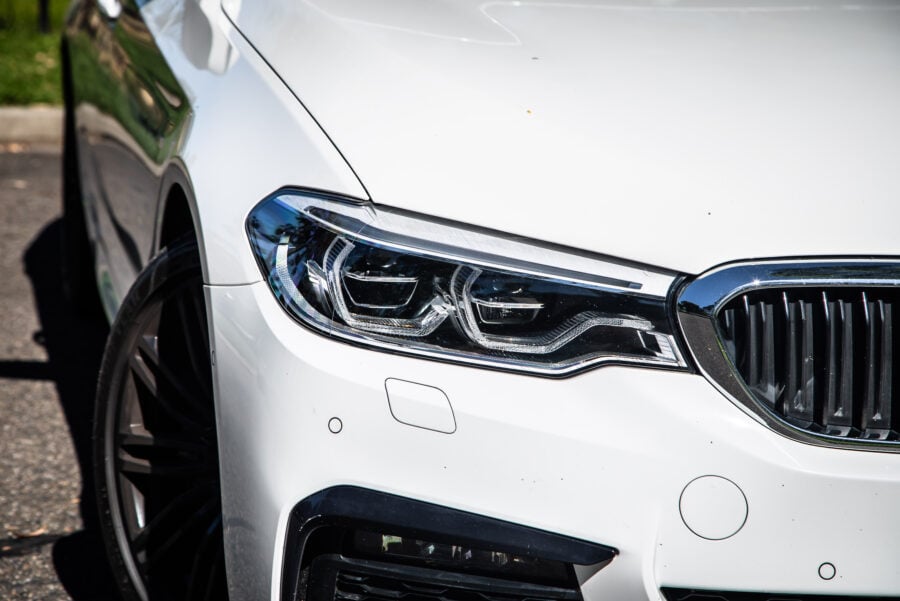 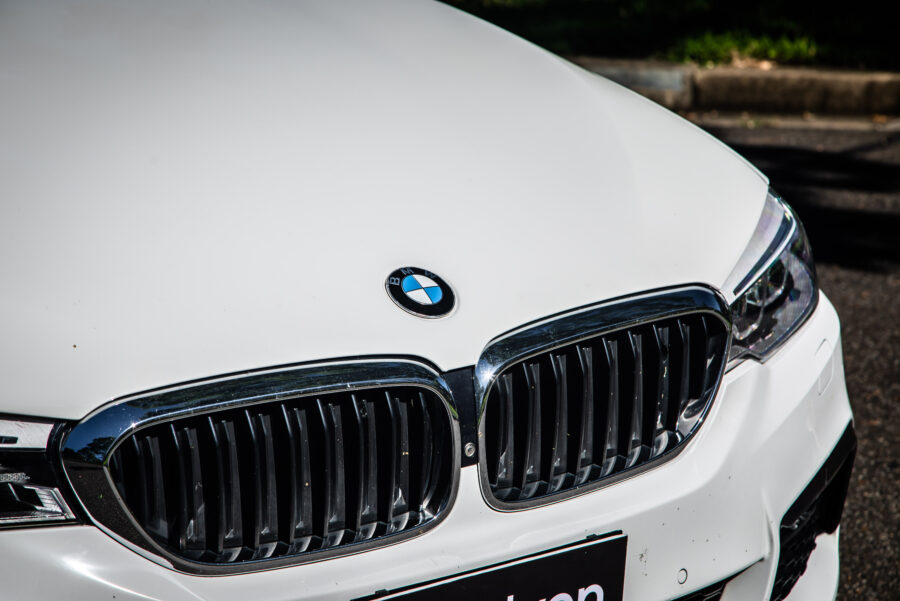 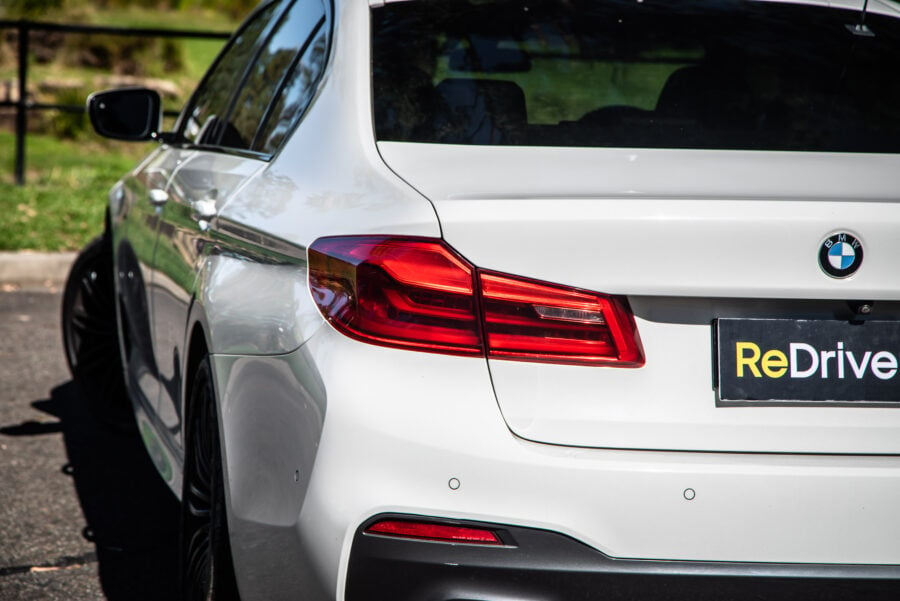 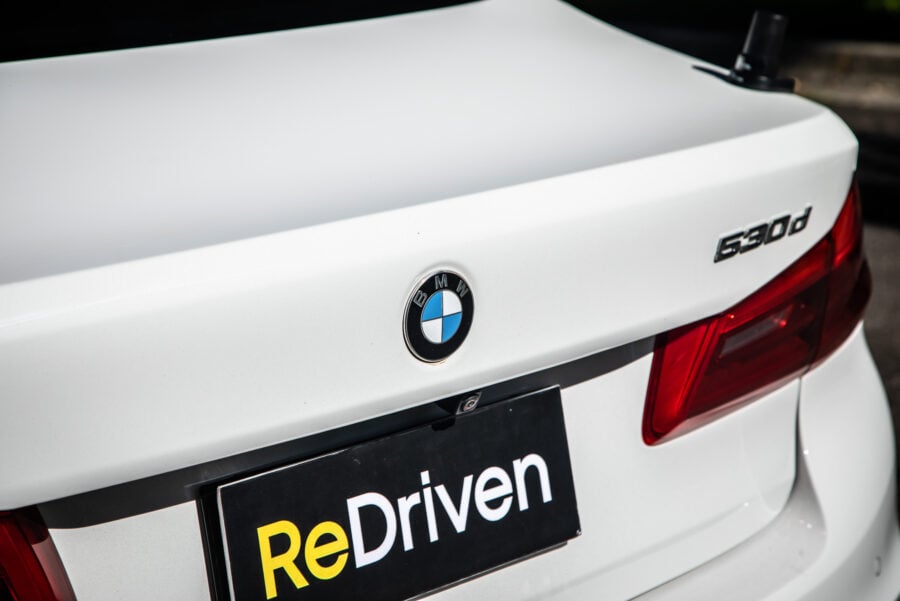 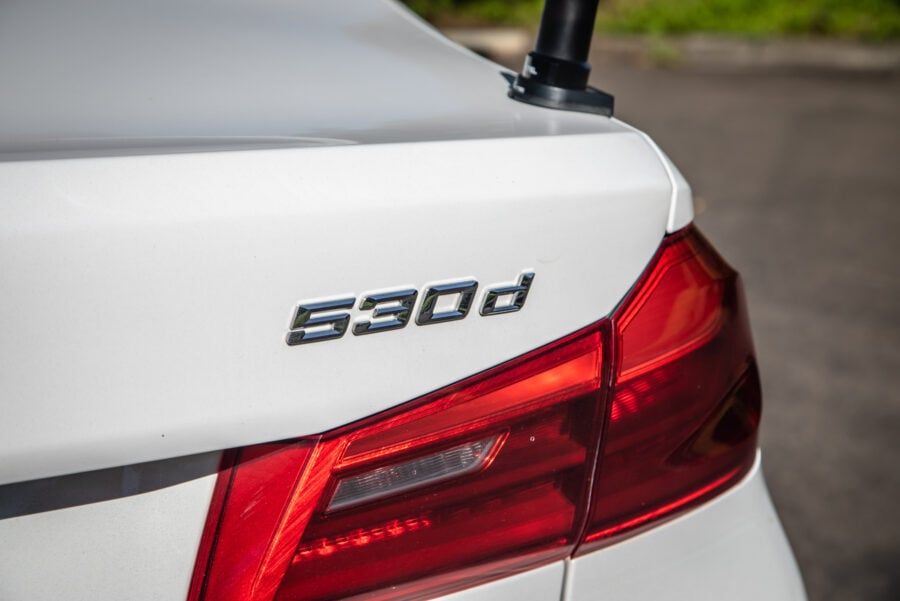 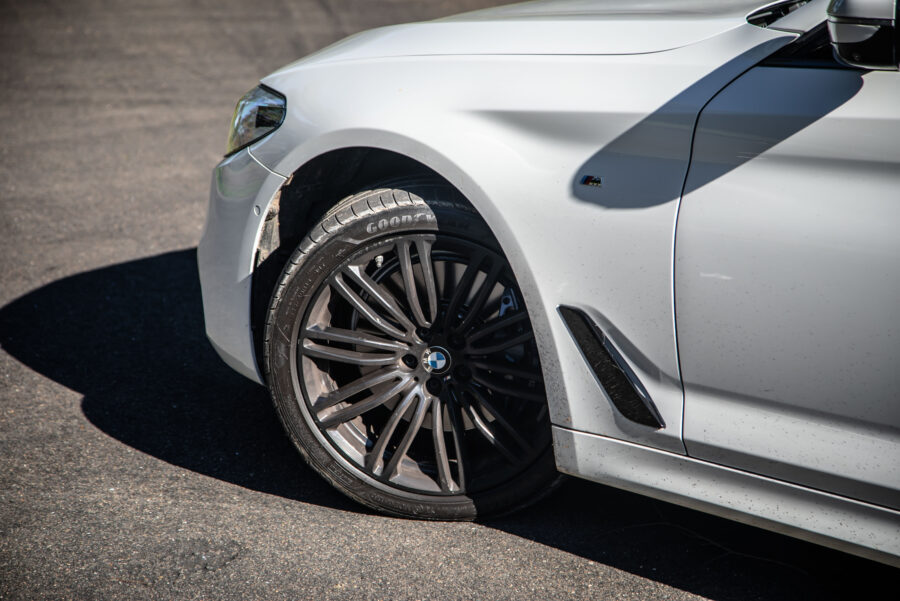 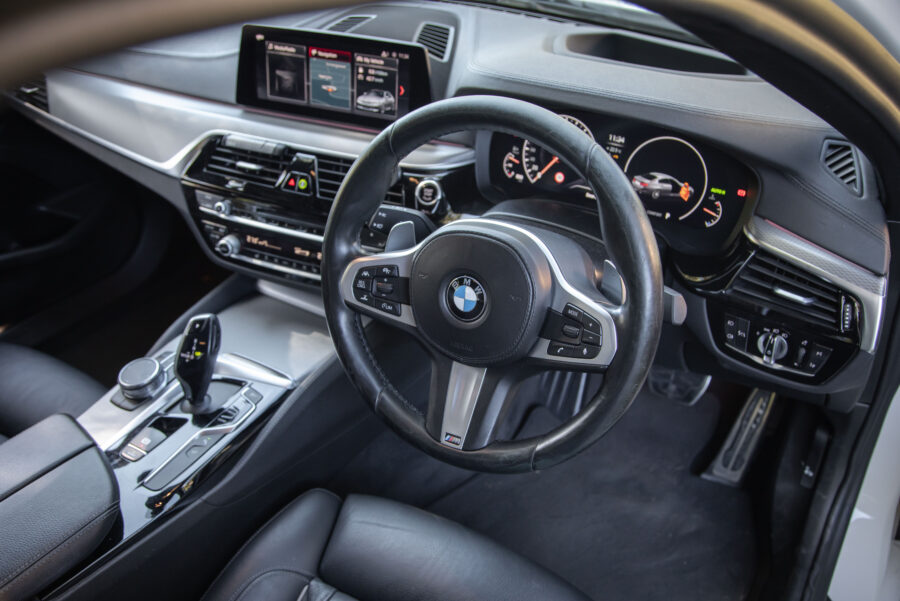 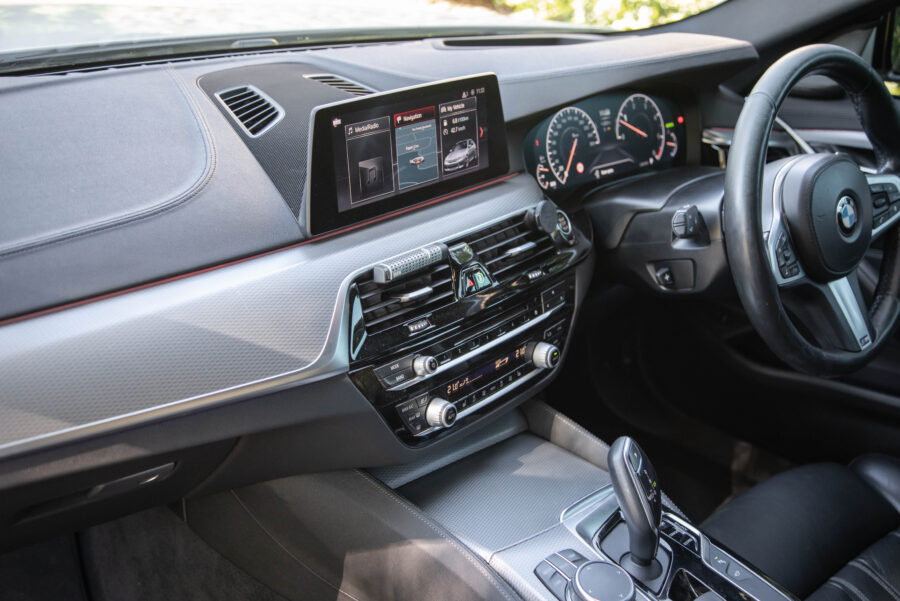 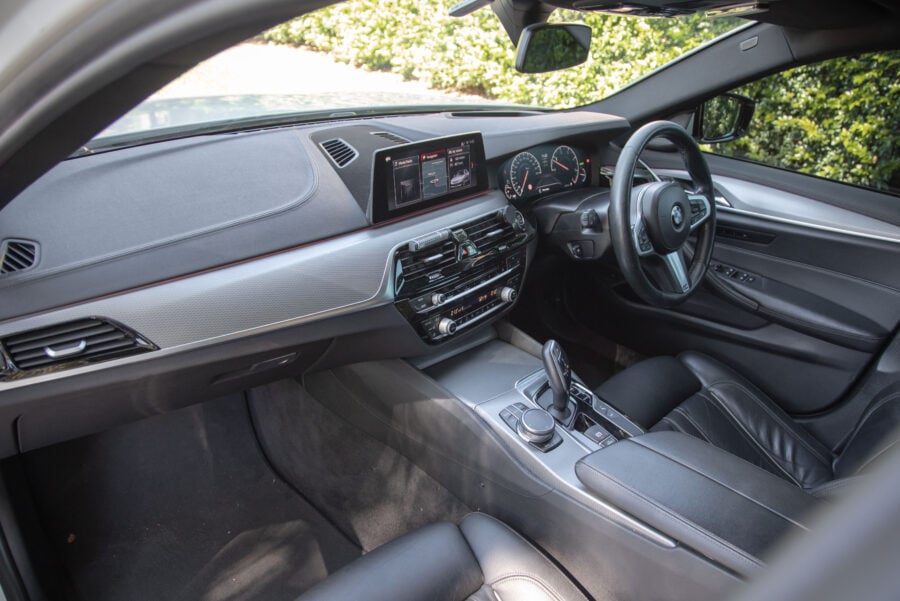 For seven generations BMW’s 5 Series has built a reputation is the quintessential large luxury sedan. Like key nemesis Mercedes-Benz E-Class, there has been purple and not so colourful patches in the 5 Series linage and brand loyalists will forever debate which generation is good and which is better.

But if you want the newest, techiest, most 7 Series-limousine-like experience, the latest version, currently still on sale in facelifted (aka LCI) guise, is your foil.

The latest 5 Series arrived in March 2016 and has been offered in Oz in sedan (G30) and wagon ‘Touring’ (G31) body styles. And while there’s a fairly logical structure to the complete ‘5er’ line-up offered to date, deciding on the right variant for you is large down to personal preferences sympathetic of your available budget. That’s because there are a lot of options and much to unpack.

Whether you prefer the comfier Luxury Line or more spirited M Sport themes, they could be had up and down the range at different price points. Still, if you wanted fancy features either way, BMW charged extra and handsomely at that. Well-optioned examples are usually good used finds.

Outside of that, the regular 5 Series typical brims with tech, especially as standard on the pricier six-cylinder 540 badged stuff. Of course, the more you spent the more elaborate the spec and equipment. And come 2017 performance and pricing took big leap with the arrival of the M5.

The M5, a proper M-car, is such an animal apart it gets its own F90 model designation. With its hellacious 441kW and 750Nm bi-turbo 4.4L V8 and (switchable) all-wheel drive, the regular M5 Launch Edition ($200k) could dispatch 0-100km/h in 3.4sec. A more potent 460kW M5 Competition was also offered, dropping performance times and raising the entry price ($230-plus).

Something of a sweet spot in range was the 2020 arrival of the (G30) M550 xDrive. In either full-fat ($150k) or stripped-back Pure ($135k) guises, it was the missing link between mainline 5ers and the manic M-cars, fitting a different 390kW/750Nm turbo 4.4L V8 to the M5 if still offering wild, sub-four-second performance via all-paw traction.

The LCI facelift, in July 2020, brought minor styling changes and updates for the 2.0-litre petrol and diesel powertrains. Cabin also got a flashier and more elaborate multimedia system.
To date, the king of heap remains 2021’s “track-focused” 467kW M5 CS, with a 3.0sec 0-100km/h claim and a circa-$306k price tag.

The 520d/520i are the entry models in the 5-series range. The models came standard with the luxury line package, with an option to upgrade to the M Sport package.

The 520d was also available in a 5-door wagon, which was discontinued for the Australian market with the mid-2020 facelift/update.

With a facelift and update that occurred in mid-2020, the 520d (diesel) was dropped and the 520i remained. The model came standard with the M Sport package, and received several M Sport package features, as well as adaptive LED headlights, a 12.3-inch drivers instrumentation display, 12.3-inch iDrive infotainment display and wireless Apple CarPlay and Android Auto.

The 530i and 530d models were the next step up in the 5-series range, both receiving more powerful turbocharged 4-cylinder petrol and diesel units, respectively.

Both the 530i and 530d came standard with the M Sport package, however buyers could opt for the Luxury Line package at no-cost.

The 530i was also available in a 5-door wagon, which was discontinued for the Australian market with the mid-2020 facelift/update.

The 530e is the 5-series plug-in hybrid model, fitted with a 4-cylinder turbocharged petrol engine and an electric motor.

As with other 5-series models, the 530e came standard with the M Sport package.

The 540i was discontinued as part of the mid-2020 facelift/update; and replaced with the M550i.

The M550i xDrive Pure added a bi-turbo V8 engine and all-wheel drive (AWD) and featured luxury features similar to that of the 540i in M Sport guise, and was introduced as part of the mid-2020 refresh of the model.

The M550i was also introduced during the mid-2020 facelift/update and replaced the 540i as the top-of-the-range model. The M550i xDrive included most of the 540i equipment as well as adding active steering, BMW Laserlight, soft-close doors and a leather instrument panel trim.

Buying this generation of 5 Series has less to do with the 5 Series and more to do with your net worth.

No matter what trim or model or spec, the 5 Series is a truly superb car. If you require a fuel efficient quiet and luxurious cruiser, there’s a 5 Series for you and if you want a car that will rearrange your perception of physics while injecting genuine fear into your passengers while you tear through corners at near impossible speeds, there is also a 5 Series for you.

And if you want all the warm and fuzzy’s that come with feeling like a highway patrol cop yet don’t want to put your life on the line every time you go to work, there are the ex- highway patrol cars.

But the problem is, as we’re already seeing with this generation and as we’ve seen from previous generations of 5 Series, they do have a habit of depreciating in value at near terrifying speeds and unless they’re maintained fastidiously they unfortunately don’t show great longevity.

Therefore while yes the 5 Series is a superb car, unless you have the financial means to deal with not only the depreciation and the maintenance required to keep these going, but you can easily afford to pay for what may be some scary repair bills in the future, no you should not buy a 5 Series.

Overall, if you have money to burn, sure buy a 5 Series they’re awesome, but if you’re on a tight budget, sorry but no, it’s not worth the risk. A Lexus GS may be a safer bet.

In-terms of if you should buy an ex-Police highway patrol car, while you may save thousands of dollars, it can be nearly impossible to ascertain just how much use (or abuse) an ex-patrol car has been subjected to.

It’s honestly up to you if you want a car with a good service history, or a history of good service.