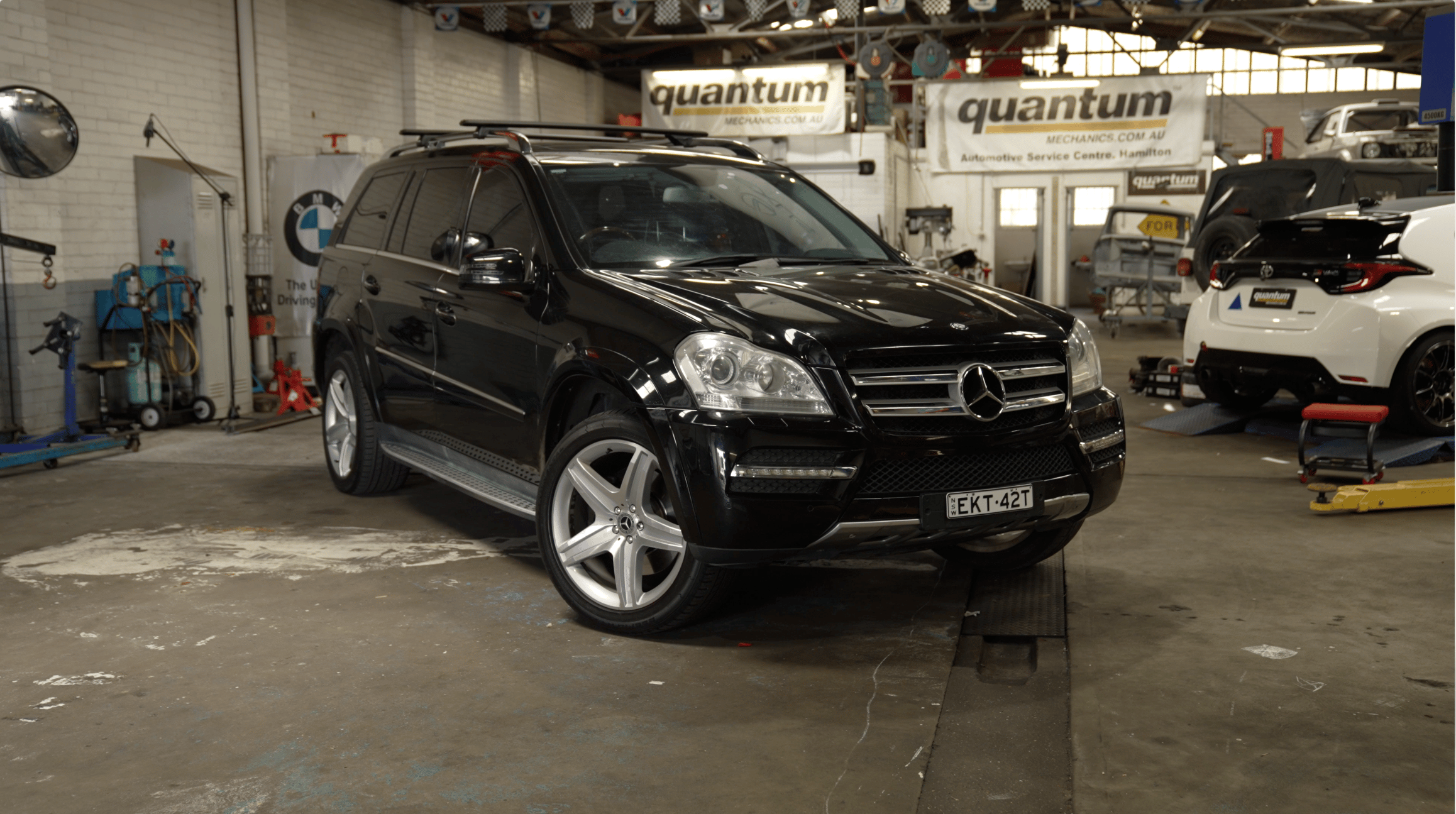 If you believe more is more, the X164 GL-Class is all the Benz-branded metal, glass and rubber today’s reasonable money can buy. Over five metres in length, around 2.5 tonnes kerb, it was, during its 2006-2012 release, a proper adult-friendly seven-seater, unabashedly aimed at the North American market where the luxury SUV was manufactured (in Tuscaloosa, Alabama).

Categorised as ‘large’ or ‘full-sized’ in some markets, the plus-sized GL wagon – and it contemporary GLS successor – is considered ‘upper large’, bigger and more commodious than the old ML (nee GLE) with which it shares technical relation by way of its stretched and widened common platform.

Unlike so many of its ladder-framed competitors, such as the Land Cruiser-based Lexus LX, the Benz GL has unibody construction, offering a sound foundation for genuine luxurious on-road character when paired with air suspension. That said, the GL formula brought reasonably capable off-roading chops via hardware such as ride height adjustment paired with constant all-wheel-drive, a two-speed transfer case and locking centre and rear differentials.

The GL-Class was do-all family-focused Mercedes-Benz, one markedly more capable than the ML-Class. And asked handsomely for it.

Back at its 2006 launch, you could scrape into the basic GL320 CDI diesel for $104k, but if you wanted a fine example you had to loosen the purses strings quite a bit: a reversing camera was an extra $950, power-folding mirrors another $500. And that’s before you ticked options boxes for nice infotainment or genuine leather hide.

Neither if the initial engines were particularly frugal. The GL320 CDI’s 156kW/510Nm 3.0L diesel V6 carries a 10.0L/100km claim, while the 285kW/530Nm 5.5L naturally aspirated petrol V8 presents a sobering and quite optimistic 13.5L that skyrockets form there around town. Both are backed by seven-speed automatics.

The X164’s short six-year lifecycle was punctuated by a mid-cycle facelift, in late 2009, bringing mild restyling outside and changes to the variant line-up aligned with some fiddling to the powertrain menu.

The old 320 CDI became the newly rebranded GL350 CDI…with essentially carryover running gear and a higher ($114k) entry point. You could, however, opt for spruced-up, leather-dipped GL 350 CDI Luxury wanting for tidy $127k. However, for MY11, a GL350 CDI Blue Efficiency version was released, at $120k, with measurably higher 195kW/620Nm outputs and a lower 9.2L economy claim.
More oiler goodness? The 225kW/700Nm 4.0L twin-turbo V8 diesel offered overseas to this point finally arrived locally as the GL450 CDI with lusty seven-second performance, a near 12-litre thirst and wanting for almost $170k. The bent-eight oiler sat just a few grand under a new flagship that was a lightly fettled Luxury version of the GL500 V8 petrol.

Clearly formulated for US tastes, the big Benz ultimately failed to the hit the mark with Aussie buyers quite as accurately as either its smaller ML/GLE stablemates or the likes of key rivals such as Land Rover Discovery 4.

It sold in modest and unremarkable numbers. Worse, it got tainted with a ‘soccer mum’ stigma in Oz and perhaps unfairly so on the merit of what the GL-Class offers in the duality of luxury and (reasonable) multi-terrain purpose. And continues to do in the current X167 GLS.

So how does the older X164 generation fare today as a used prospect firmly at the tail end of the ravages of depreciation? Let’s find out…

The GL 320 CDI is the base model in the GL range, featuring a 3.0-litre V6 turbo-diesel engine, 7-speed automatic transmission with a permanent 4WD drive system and air suspension as standard.

With the first series of the GL-class, the engine designation were also the spec level, and so buyers could either upgrade to the more expensive and more powerful GL 500 model or choose from a variety of options available to the GL 320, so when looking at GL 320’s, it is important to ask the current owner of any options or accessories fitted to the vehicle.

The GL 350 was introduced as the base model as part of the X164.II revision released in December 2009. Additional comfort and convenience features were introduced as was the COMAND infotainment system.

The GL 350 CDI also rolled back some features that were previously available on October 2008 GL 320 CDI models, which were offered on a higher spec GL 350 CDI Luxury model.

The GL 450 CDI Luxury was introduced as a V8 twin-turbo diesel offering as part of the X164.II revision released in December 2009.

With the exception of the engine differences to the GL 500 Luxury, the GL 450 CDI Luxury offered the same features standard, with a range of optional features and accessories that could be added.

The GL 450 CDI Luxury was introduced as a V8 twin-turbo diesel offering as part of the X164.II revision released in December 2009.

With the exception of the engine differences to the GL 500 Luxury, the GL 450 CDI Luxury offered the same features standard, with a range of optional features and accessories that could be added.

The GL 500 is the top of the range in the GL range. With the X164.I series, the GL 500 was a engine and spec upgrade over the GL 320 CDI model, and was updated in October 2008 with additional features such as 20-inch alloy wheels, four zone climate control and bluetooth connectivity.

With the X164.II update released in December 2009, the GL 500 became the GL 500 Luxury and offered the same standard features as the GL 450 CDI Luxury, with the main difference being the V8 petrol engine.

We understand why you’d want to buy a used GL Class, a used example selling for tens of thousands of dollars less than what they were when new seems like a bargain, but chances are, it isn’t.

If the GL retained their value at all and the chances of mechanical or electronic issues arising were slim to none, then maybe you should buy one, but it’s near impossible to financially justify buying a car thats value will continue to depreciate at near catastrophic levels, while it’s maintenance and possibly repair costs continue to go up, again at what could be catastrophic levels.

Yes there are examples out there that are faultless but, even if you can afford or are happy to ignore the financial risks and are mentally prepared for the potential mechanical nightmares, while it generally is a good car, it’s not a stand out, amazing or some phenomenally special SUV in anyway. Even when in mint condition, it’s just, acceptable.

If you just have to have the biggest Mercedes Benz SUV and you can comfortably afford the potentially stupid maintenance costs and can somehow justify the extreme depreciation, sure why not, it’s financially dumb but if you’re happy to take on this risk, you possibly have more money than sense.

However, if you’re buying a GL Class because you think it’s a bargain and you can only just afford the car itself, or you’re a fan of making money instead of throwing it away, absolutely not, you should not buy a GL Class.

Remember the old saying, the most expensive car in the world is a cheap Mercedes.