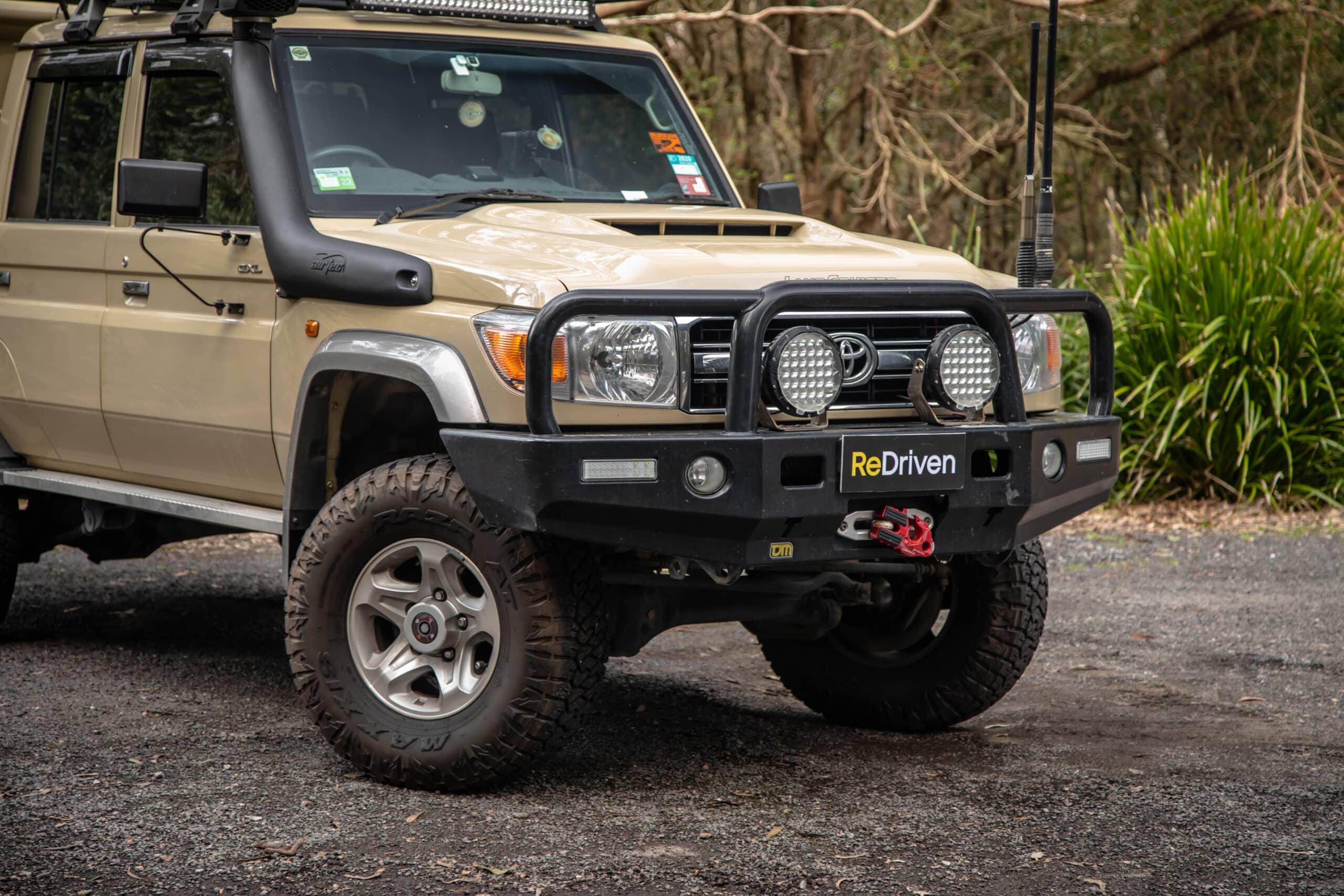 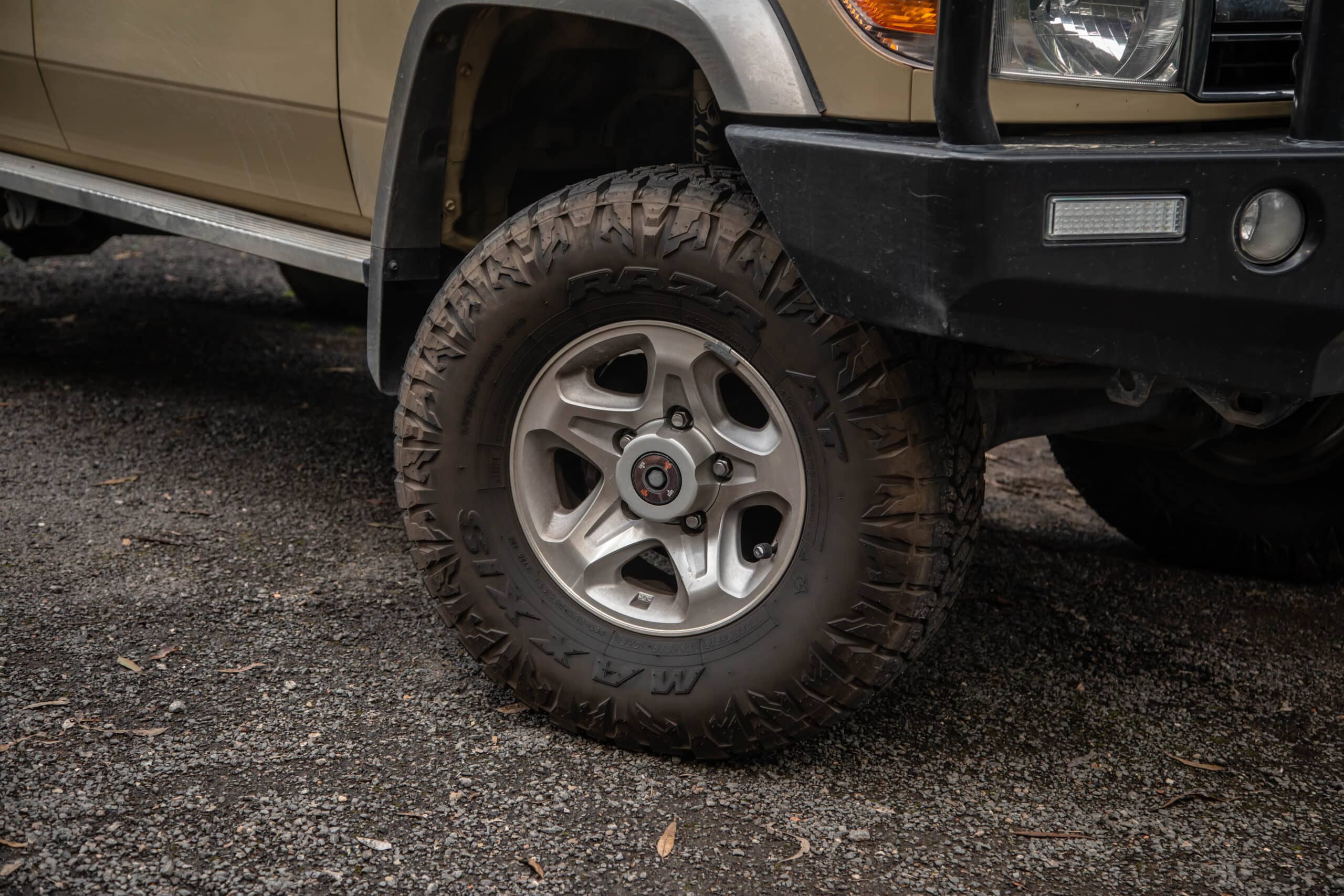 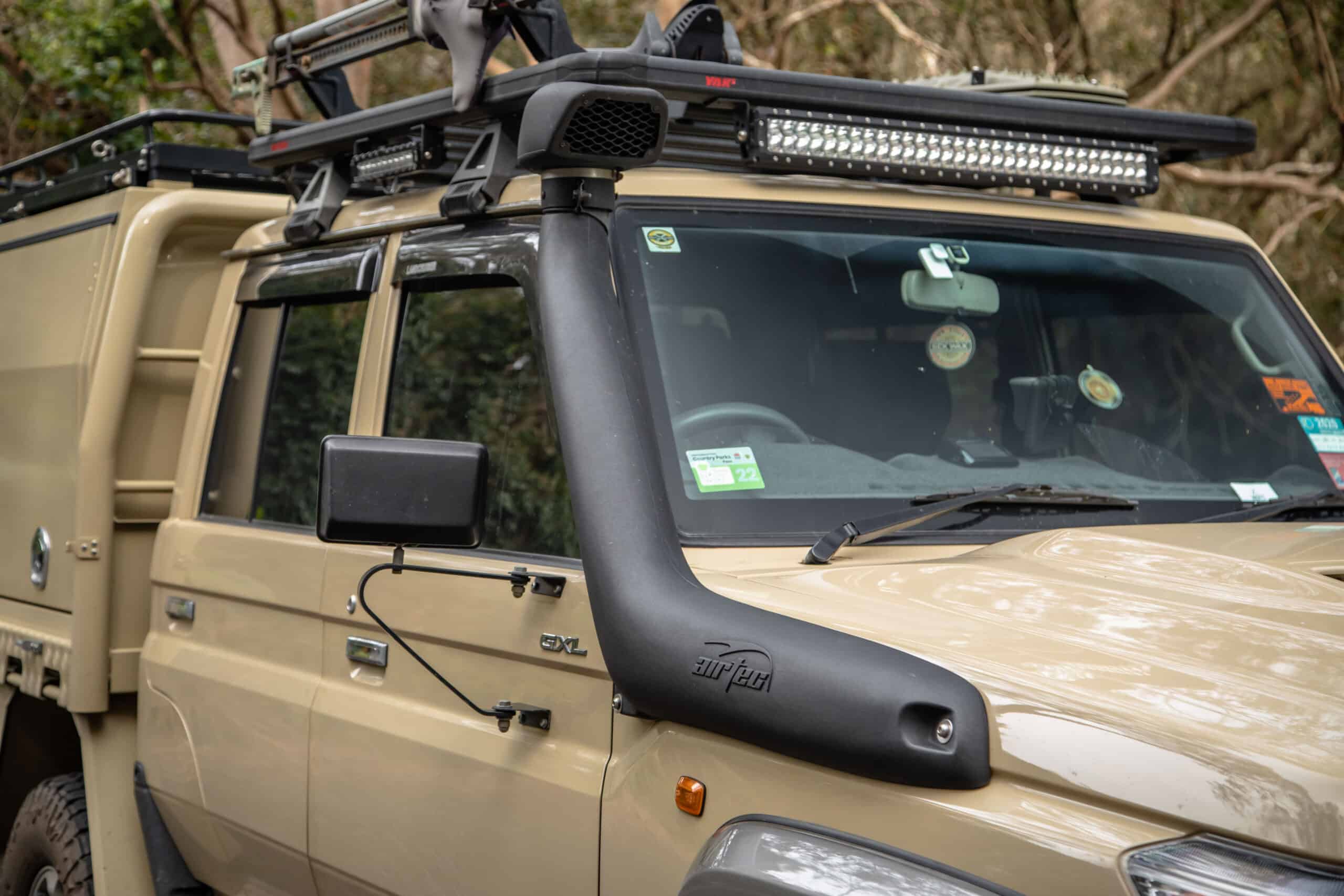 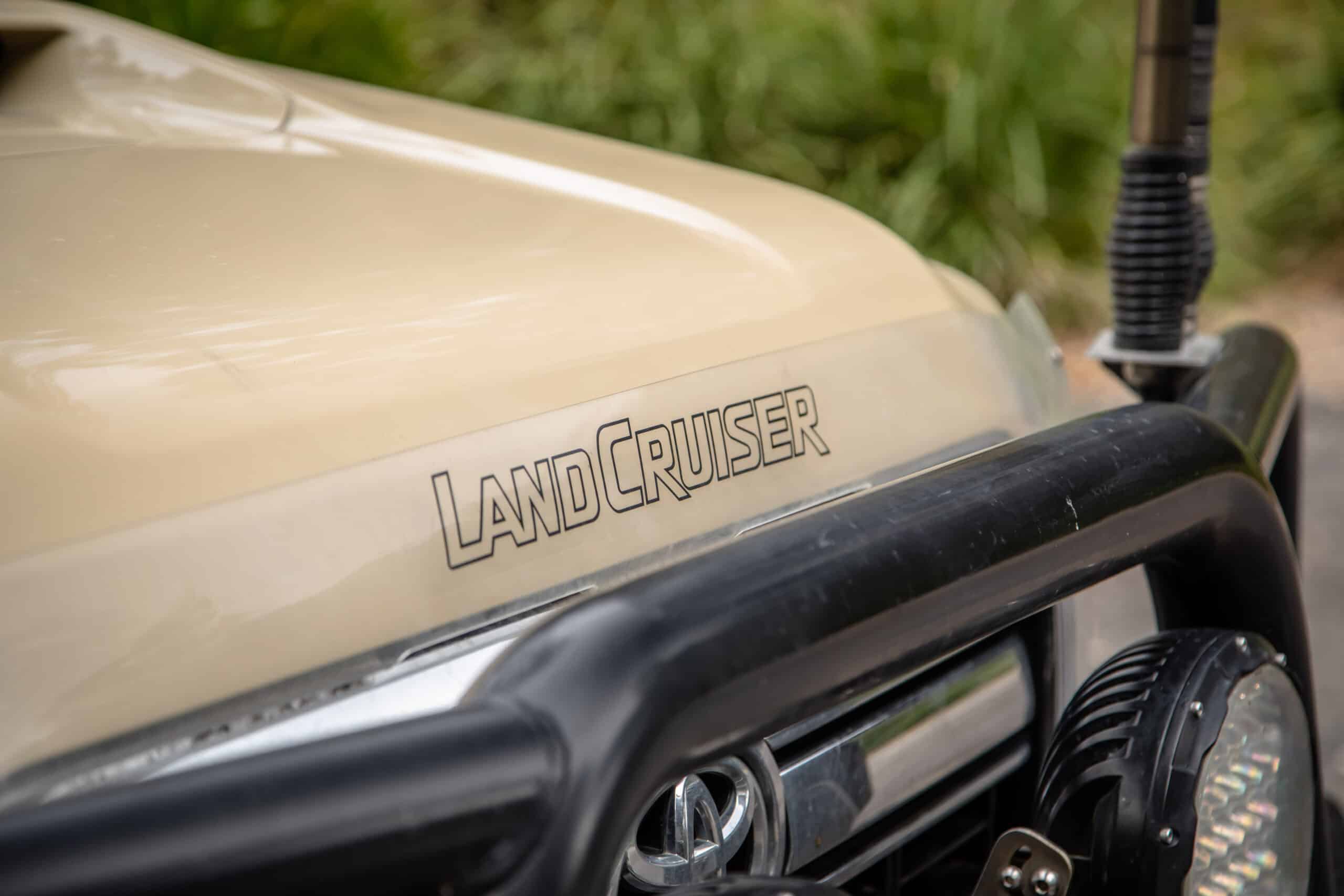 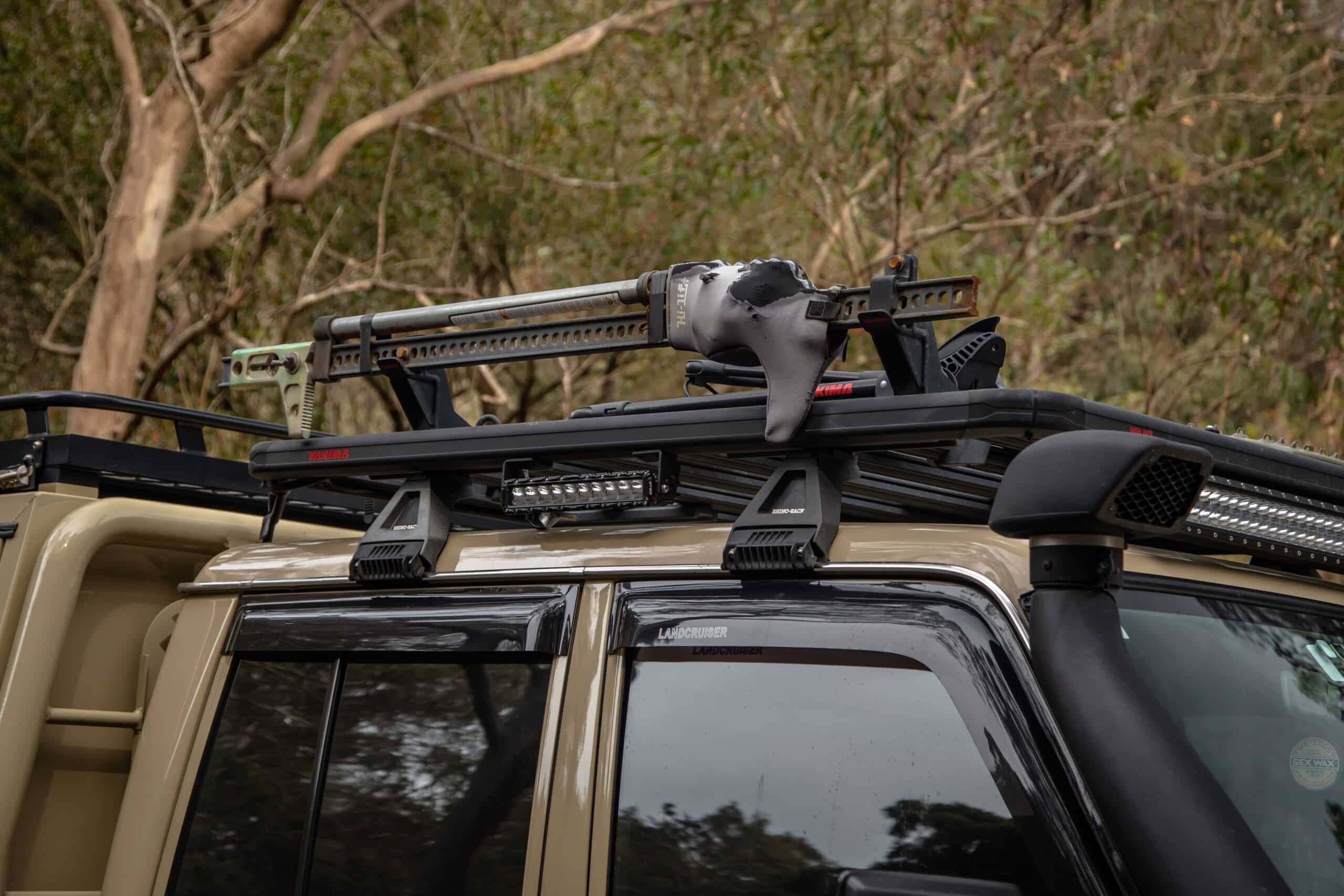 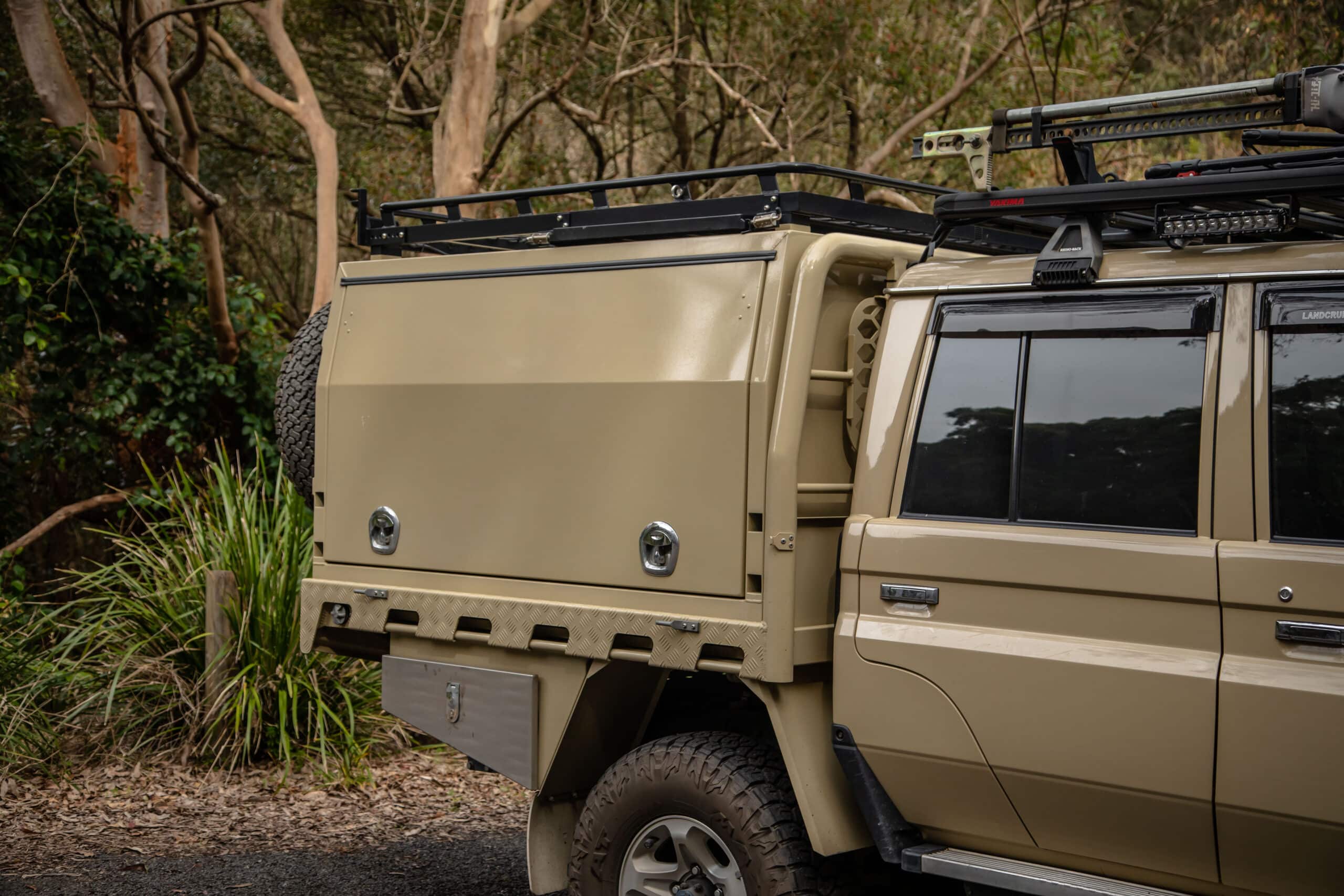 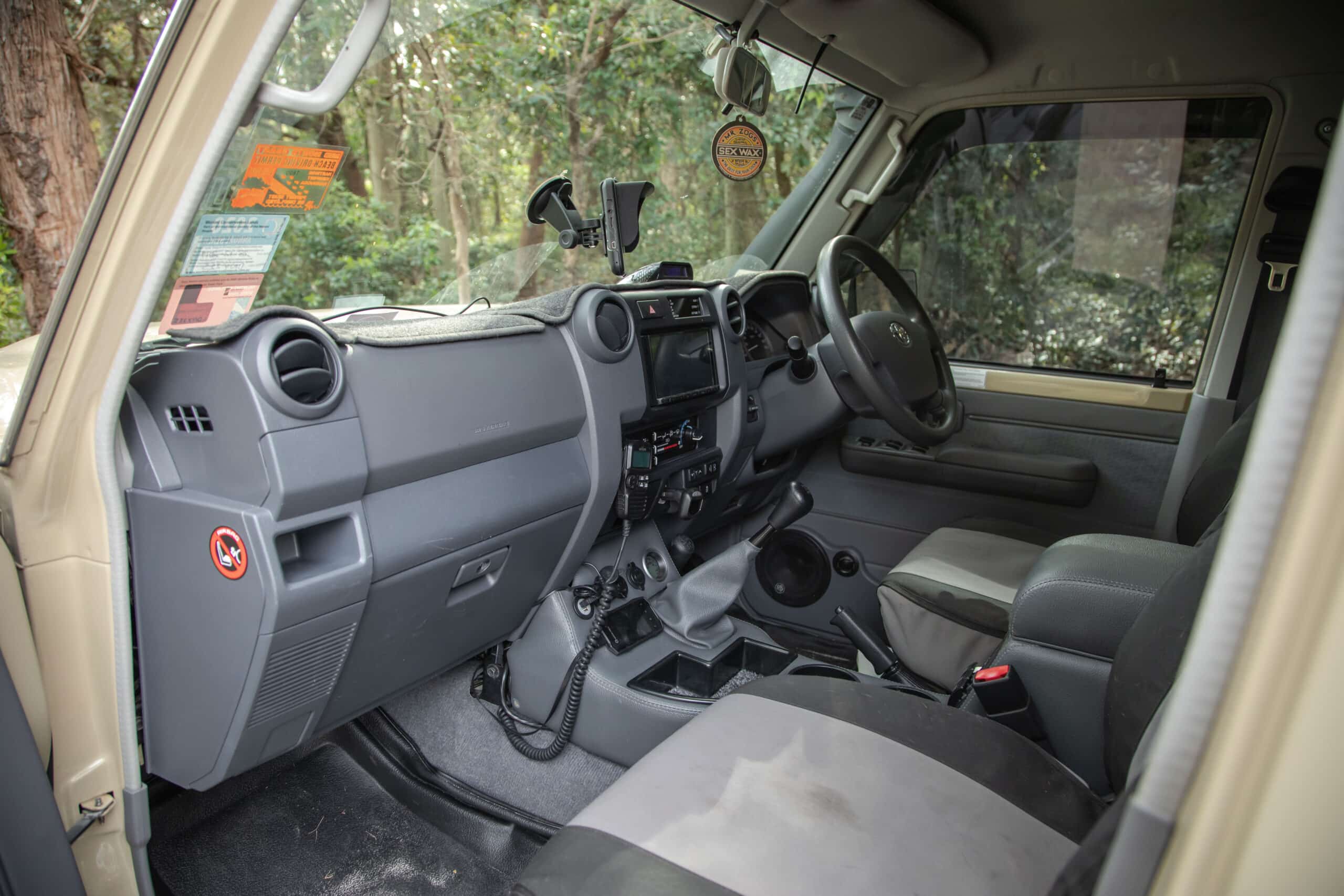 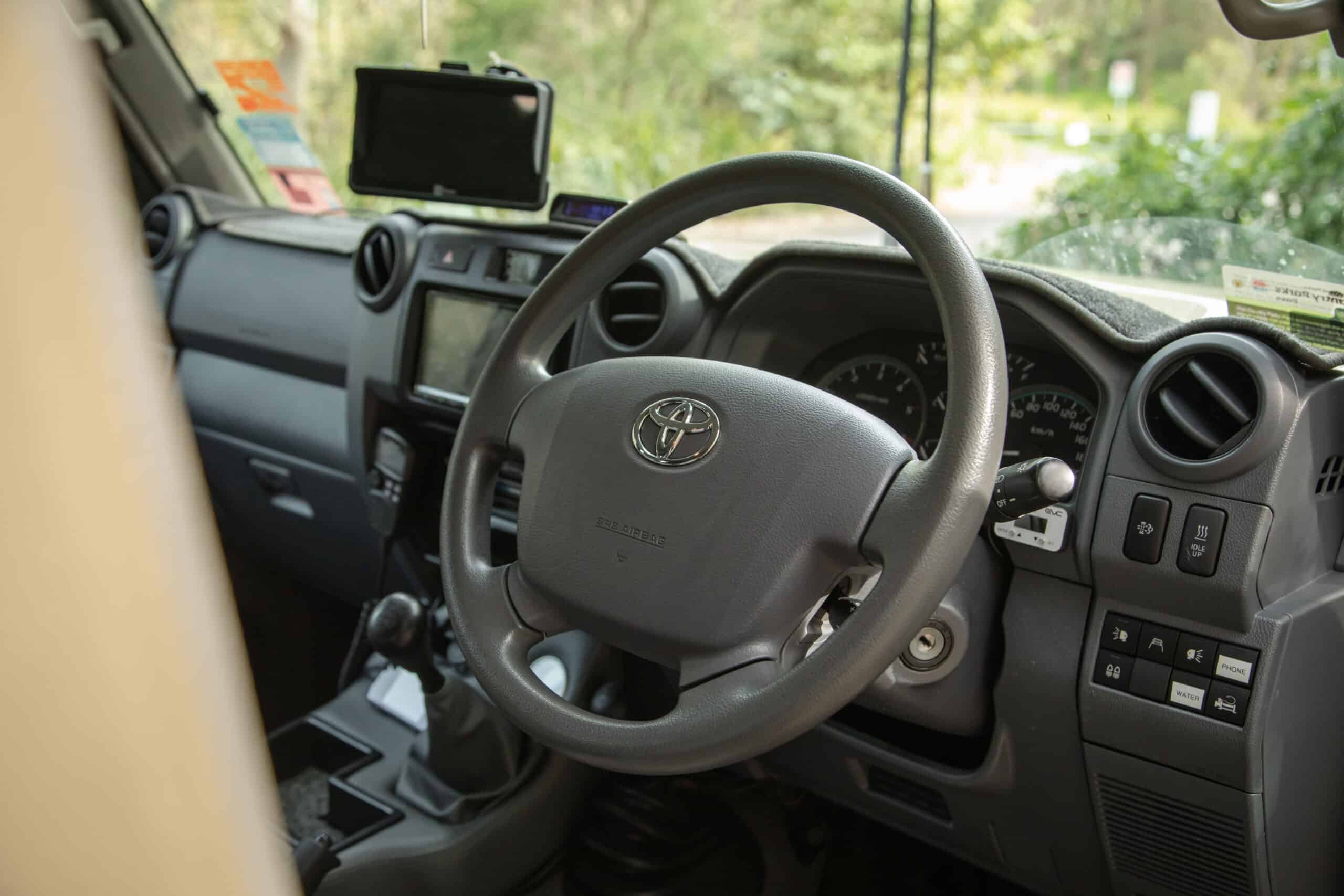 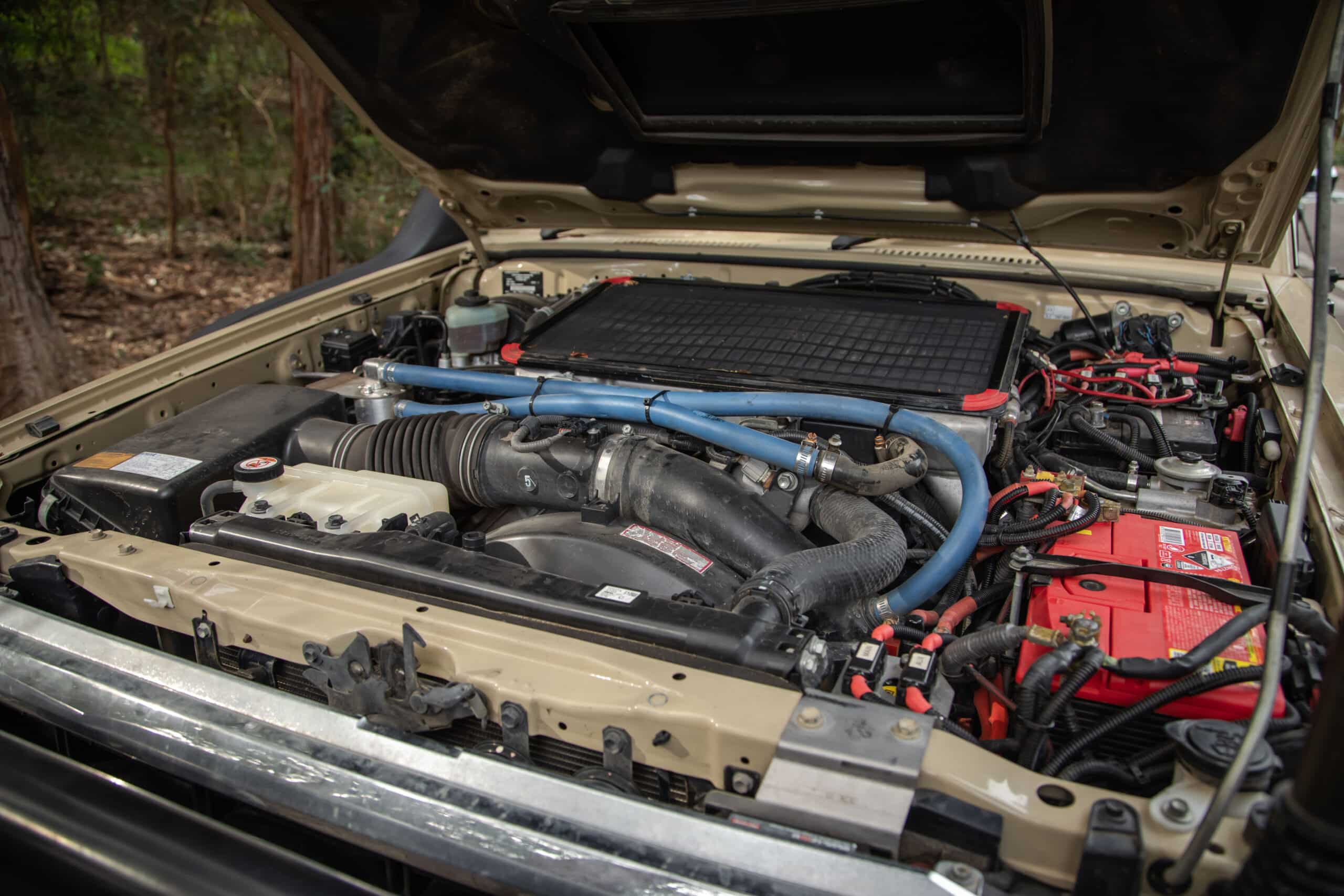 The 70 Series has been around since 1984 however in this cheat sheet, we’re going to focus primarily on the post 2007 V8 models as they are far more prevalent on the used market.

Although as a quick history lesson, prior to 2007, the 70 Series has been available with petrol or diesel engines, in short, medium or long wheelbases and (depending on chassis length and year availability) as a two-door wagon or van with a hardtop or a version with a removable fibreglass roof section or as a two or four-door cab chassis or pickup.

Currently, the majority of used 70 Series here in Australia are available as the 76 Series wagon, 78 series troop carrier and this, the 79 series cab chassis or ute.

Regardless of which 70 Series, all have been designed and engineered to be Toyota’s more rugged workhorse version of the Land Cruiser vs the more luxury and consumer focussed 60 through to 300 series Cruisers, initially targeted at customers like mining companies and farmers.

Along with a suite of safety revisions, the major upgrades from 2007 include a revised dash, extra practicality, tech and features and an enlarged litre fuel tank from 2013.

The 2016/2017 update increased the V8’s power and torque thanks to new injectors and engine changes however this now Euro V compliant engine required a diesel particulate filter (DPF) to be added.
This was controversial as (mentioned below) the DPFs fill up with soot unless exhaust temperatures are kept high and this has become a big problem for owners who trickle along bush tracks or around properties at idle revs, with low exhaust temperatures. Not to mention there have been documented fires in 70 Series vehicles around Australia, caused by dry vegetation getting caught around the hot DPF housing.

Other additions for the 2016/2017 update include other mechanical upgrades to improve fuel economy, and lower noise, vibration and harshness levels while also improving handling and stability.
2021 updated the infotainment system, including a larger screen but unlike almost every other vehicle on the market, the 70 series lacks Apple CarPlay, Android Auto and digital radio.

In terms of the variants, the vast majority of 70 Series will be split across three levels, base spec Workmate, mid range GX and top spec GXL.

In terms of the exterior, although the majority of 70 Series have manually winding windows, there are reports that the Electric Windows are prone too feeling sticky and resistant.

Rust isn’t what we’d call a hugely common issue but it can appear under the windscreen and the snorkel (if fitted).

The doors can fill with water if the drain hole is blocked, only really an issue if you plan on river crossings.

Inside, the Cigarette lighters are known to fail a due to other electronics “piggy backing” off of it.

The handbrake may need adjusting to operate smoothly.

Mechanically, it needs to be considered that the 70 Series will be used differently for a range of various applications.
For example, hard-core off-roading folk have very different common problems than those who mainly tow a caravan, and they have different problems to the examples that are used in mining or commercial applications.

Another thing you have to consider, as these are hugely popular, you don’t have to look very hard to find absolute horror stories about all the problems they have. But the reality is statistically, they are actually incredibly reliable.
Engine wise, the earlier 1HD engines are arguably one of the most reliable engines in that category ever made. With regular servicing and a set of injectors every 200k they’re virtually unstoppable.

The later models with the 1VD V8, (which, in Australia is in all of them since mid-2007) isn’t as reliable. It’s not a bad engine at all, it’s just more complicated, and there’s more to go wrong.

Again, we need to emphasise that the reliability experience can be vastly different based on the type of usage and any modifications that might have been done.

Some of the more common problems are fuel system related, for example pressure sensors and suction control valves at the cheaper end, and high-pressure pumps and injectors at the expensive end. The life of the pumps and injectors will be significantly longer with more frequent fuel filter changes. You don’t necessarily need an after-market pre-filter or anything (it won’t hurt). Just change the factory filter every 10,000km, it costs virtually nothing compared to a $5,000 to $10,000 fuel system overhaul.

The inlet system and EGR valves can clog up pretty badly so its highly recommended you fit a catch can to help with that, but be warned, in some cases that will void your manufactures warranty. The topic of catch cans versus warranty, is part of a much bigger conversation which we’ll have another day.

Now if you have an older or higher mileage engine that is having any fuel system or inlet repairs you might want to spend an extra $500 or so and get a new starter motor while you’re at it, because it’s located in the V of the V8 and everything’s got to come off to get at it.

The turbo is are another big-ticket item that sometimes fails on higher milage or poorly serviced units and if it fails, it can be about a $4000 round trip. That’s by no means every thing that can go wrong, just a few examples.

Although they’re a fairly tough engine, poor modifications, dodgy tunes and poor servicing can lead to the worst-case scenario of a blown-up engine, which in these can easily land you with a bill over $20,000. It definitely pays to look after them.

As far as the drivelines go, the clutches are definitely a weak point so if you’re towing or off roading that’s something you should upgrade sooner rather than later and you can usually get something decent in there for around $2500 to $3000.

The gearbox itself, does have a few issues, one of those is fifth gear failing and it’s recommended that if you’re towing or heavily loaded, change the gearbox & diff oils every 20,000km instead of 40,000km, and don’t use fifth gear when you’re towing.

The other driveline elephant in the room is the front and rear wheel wheel track difference, which is a result of the front of the vehicle being widened to accommodate the V8, however Toyota never really got around to widening the rear to match. This causes handling issues and in extreme cases premature wheel bearing failure, not to mention it just looks weird.

There are a whole range of different price points to fix this issue, ranging from different wheel offsets which means you need two different size spares, right up to a full replacement wider diff housing which can cost well over $10,000.

We know this may all sound like doom and gloom but keep in mind the perfect single all round daily driver, 4WD, work and tow rig just does not exist
Yes they are big they are tough and they are extremely capable. However, they are expensive to maintain and very expensive to fix.

Available in a 2-door single cab chassis, the Troop Carrier, the 4-door wagon SUV and a 4-door cab chassis from 2013, the Workmate is the base model of the V8 70-series range.

This spec is fairly basic in terms of standard equipment, with a steel wheels, basic gauges and a bench seat in front row.

There has not been much in the way of modern safety equipment fitted to these vehicles until 2009 when dual front airbags were included as standard equipment, and then ABS in 2013, followed by vehicle stability control, traction control, brake assist, electronic brakeforce distribution and for the single cab chassis models – driver’s knee and curtain airbags.

Several updates have also seen technology upgrades including bluetooth, USB connectivity and a 3.5mm auxiliary input added in 2013, followed by cruise control in 2017 and then a 6.1-inch infotainment system with satellite navigation in 2020.

The GX model is the mid-range spec, available only as a single-cab chassis and featured 16-inch alloy wheels, over fender flares and wide front mudguards as additional equipment.

The GXL is the top-of-the-range spec in the V8 70-series range and adds a variety of chrome styling features, front bucket seats, remote central locking and electric windows.

If you should or shouldn’t buy a 70 Series isn’t one of those no you shouldn’t buy one because it might blow up and cost you a million dollars to fix because the 70 Series has proven its reliability and longevity for nearly 40 years.

However, the 70 Series is a hugely compromised vehicle. For what they cost in standard form, they ask a near insane amount of money for the absolute bare minimum when it comes to equipment, features, creature comforts, driving dynamics and safety tech.

Plus even though they do offer an incredible base on which to build your ultimate off-roading, towing or touring machine, it’s important to ask yourself if you’re willing to pay so much money and put up with the long list of negatives to justify the few and specific positives.

We see absolutely nothing wrong with spending a fortune on your hobby or your pride and joy, and there is something incredibly satisfying about creating something like this. Just don’t try to convince anyone that the 70 Series, in standard trim, are the best four wheel drives ever made.

Should you buy one? If you’re a farmer, a tradesperson or a business owner and you’re buying one as a daily workhorse that you can also take away on weekends and you’ll benefit from the tax breaks that come with buying a commercial vehicle, absolutely buy one.

Secondly, If you genuinely require the incredibly narrow focus and sheer ability and resilience of the 70 Series to explore far away desolate lands and you can easily afford one, absolutely buy one.

However, If you have no real intention of heading deep into the wilderness and you’re only buying a 70 Series to live out some sort of tough person fantasy you have about yourself, or you just must have the latest masculine fashion accessory to compensate for a lack of self esteem, sure go ahead and buy one but just know, you’re ruining the 70 series image for those that are the worthy owners.