A great performance car for under $10,000, surely that’s impossible! Well, no it’s not, there are some absolute bargains out there for fun cars on a budget and here is our top 5. In fifth place, a car that’s been around since 1970, it’s the Toyota Celica.

For 10 grand, we’d recommend looking for seventh-generation, 1999-2006 Celicas in the best possible condition you can find.

Ok, it’s not the fastest thing in a straight line and has to be revved hard to get the best out of it, which is incredibly fun, but the biggest issue this generation Celica had was that when it was new, it was commonly compared to the now legendary Honda Integra Type R.

But while Integra Type Rs now asking immense amounts of money on the used market, the Celica is an absolute bargain. 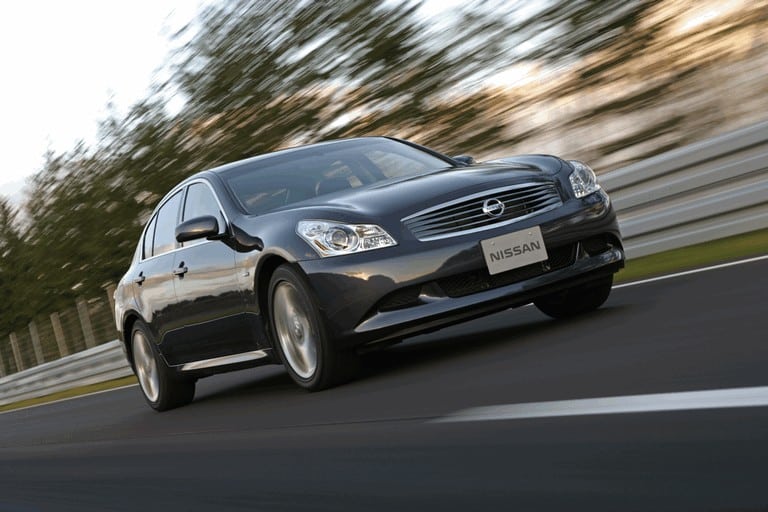 In fourth place, it’s rear-wheel drive, it has a stylish coupe body and like the Celica, has a name plate that goes back decades, it’s the Nissan Skyline 350GT.

Sharing its platform and engine with the Nissan 350Z, the eleventh-generation V35 350GT did weigh a little more and was set up to be more of a grand tourer than an outright performance car, hence the GT in 350GT.

But, make sure you buy a manual, give the engine a mild tune, fit some quality suspension, brakes and tyres and you’ll have yourself an excellent performance car for thousands of dollars less than a decent 350Z.

In third place, this thing is an absolute barrel of laughs and a genuinely talented little car, it’s the Suzuki Swift Sport.

Motoring journalists raved about the Swift Sport when it was released and now these first-generation 2005-2012 Swift Sports can be had for well under 10 grand, they make for brilliant bang for your buck.

A punchy, high-revving, 1.6-litre engine with a notchy mechanical 5-speed manual in a little hatch body with wheels positioned at the extremities of the body, sports-tuned suspension and just the right amount of visual flair makes the Swift Sport an incredibly appealing proposition. The FN2 Civic Type R is cracking good performance car but its issue is that, with some of the FN2’s suspension changes, it just isn’t as special as the Civic Type Rs that came before and after it.

But, it still has the truly superb high-revving 2.0-litre K20 engine up front, a gear change feel many car companies still can’t get close to, a chunky squat appearance that almost looks like an angry little space ship and the ability to give whoever is behind the wheel immense levels of fun and interaction.

10 grand is pushing it to find a decent FN2 and chances are it might need some TLC but, it’ll be worth it. 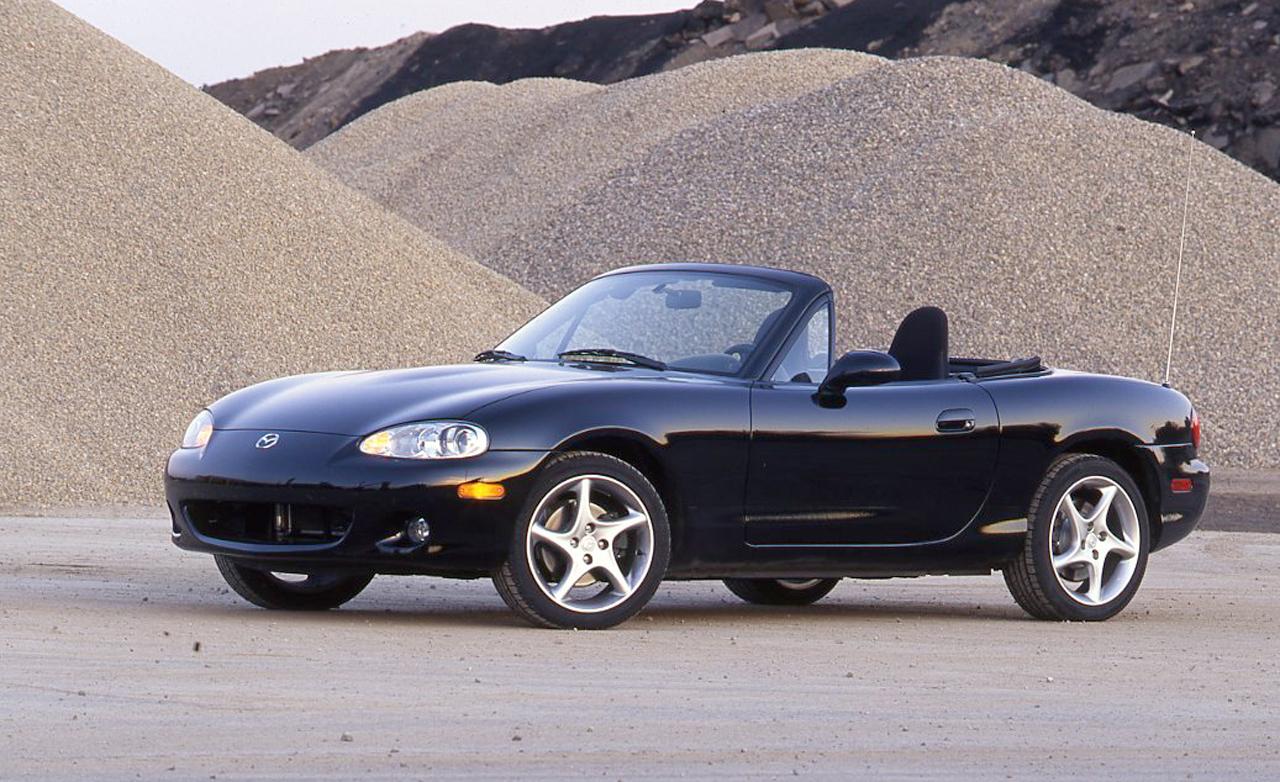 In the top spot, it’s the Mazda MX5 or Miata.

These days, for 10 grand you’ll only really have one variety of MX5 to choose from and it will be the second-generation NB with the 1.8-litre engine, and obviously you’ll get it with a 5-speed manual because the auto should be eradicated from the face of the earth.

While the original NA keeps climbing in value and is fast becoming the collector’s choice, the NB is arguably a more resolved and better overall car while still delivering an equally addictive level of driving experience.

Plus they’re proving to be reliable, if they do break they’re easy to work on and parts aren’t expensive and if modified correctly and intelligently, can make the already brilliant MX5 truly phenomenal.

For the money, we don’t think any other car will make you laugh and connect you with the essence of driving quite as well as the MX5. Surely any car under $3 grand is going to be a dodgy piece of crap but if you think that, you’d be…well look most of the time, you’d be exactly right, but, there are some great bargains to be had under $3 grand and here are our top 5. In fifth place it’s the Suzuki Swift. Finding one of these for less than 3 grand might be a challenge, but it’ll be worth it.

For this budget you’ll be looking at 2005 to 2007 Swifts and they’ll most likely have loads of kilometres on them, which look, as long as they have a healthy service history, isn’t necessarily a bad thing.

These Swifts are super fun to drive, they look pretty cool, they are proving to be a really reliable thing and are inexpensive to run.

Negatives, well the boot isn’t the biggest and like any car in this price range, if they haven’t been cared for could spell trouble. So it’s critical to check the service history and make sure you have inspected by a licensed mechanic before you hand over your cash. Of course the Toyota Corolla was going to make the list but it’s all the way down in 4th place.

Now for $3000, you’re going to be presented with a wide range of various Corolla generations and variants but the one to search for is a 2001 to 2007 ninth-generation E120 Corolla and in the best variant trim and condition you can afford.

These Corollas will be available as a 5-door hatch or 4-door wagon or sedan in four trim levels, all powered by a near bulletproof 1.8 litre 4-cylinder engine.

We say near bulletproof because while they do have an excellent reputation for reliability and longevity, with many Corollas still running strongly after well over 400,000kms, a thorough service history is really important.

In fact, we’d go as far as recommending an extremely high kilometre but regularly serviced Corolla over a lower kilometre Corolla that has hardly any service history at all. We couldn’t just have a list of small hatchbacks because even though the budget is $3000, what if you need more space and more adventure ability than what a small hatch can offer?

But, for this budget, there’s a very specific Forester you should be hunting for. You’ll want the first-generation 1997 to 2002 Forester with the 2-litre engine.

We cannot say this strongly enough, you want the 2-litre engine, not the later models 2.5 litre, trust us, get the older 2-litre.

The 2.5 litre engines at this price point will most likely have some gremlins lurking around the cylinder heads and that will result in a very expensive repair bill. The 2-litre, at this budget is a far safer and stronger option.

Yes, these Foresters have a bit of an appetite for oil and can be a bit thirsty when it comes to fuel but you get the safety and adventure prowess of Subaru’s permanent symmetrical all-wheel drive, really good ride quality, an enjoyable driving experience, great practicality and some relatively tough looks. When compared to the other cars in this list anyway. In second place, and yes finding a good one with this budget will be a challenge, it’s the first-generation 2004 to 2009 Mazda 3.

Available as either a 4-door sedan or 5-door hatch, the gen-3 is a cracker of a car.

Attractive styling, great performance and dynamic handling mixed with practicality, reliability and a decent level of safety makes the 3 a standout at this price point.

Like the Corolla, don’t let high kilometres scare you as long as it has a solid service history. But if that service history has as many holes as a fresh crumpet, maybe walk away. These are available as either a 3- or 5-door hatch or a 4-door sedan but steer clear of the sedan unless you’re ok with people laughing behind your back because they are bloody ugly.

The one to get is the 1.5 litre Sportivo, because these things are truly a ball of fun to drive, plus like the slightly more sensible 1.3-litre variants, they are incredibly reliable and even if something does go wrong, it’ll cost next to nothing to repair.

Yes they are small but around town they’re hilarious to drive, easy to park and with the rear seats folded down, can be pretty practical.